A few weeks ago, Bloomberg published an article regarding Amazon’s relationship with its first-party vendors (what is quickly becoming known as an Amazon Vendor Purge).

In the article, they wrote:

“In the next few months, bulk orders will dry up for thousands of mostly smaller suppliers, according to three people familiar with the plan. Amazon’s aim is to cut costs and focus wholesale purchasing on major brands like Procter & Gamble, Sony and Lego, the people said. That will ensure the company has adequate supplies of must-have merchandise and help it compete with the likes of Walmart, Target and Best Buy.”

Did “smaller suppliers” mean they were going to remove just first-party (1P), Vendor Central merchants who sell directly to Amazon? Or did it mean all of Amazon’s third-party (3P), Seller Central vendors, FBA sellers included?

Thankfully, Amazon alleviated many sellers’ fears, as they shot back at Bloomberg hours later with a rebuttal posted in Business Insider:

“‘We informed Bloomberg prior to publication of their article that their sources and story are wrong. We review our selling partner relationships on an individual basis as part of our normal course of business and any speculation of a large scale reduction of vendors is incorrect. Like any business, we make changes when we see an opportunity to provide customers with improved selection, value and convenience, and we do this thoughtfully and considerately on a case-by-case basis,’ the Amazon representative said.”

But would a “purge” of first-party vendors be such a bad thing?

We don’t think so, and this article explains why.

What if Amazon stopped selling many of its Vendor Central products?

As any FBA (Fulfilled by Amazon) seller knows, one of your biggest competitors when selling on Amazon is, naturally, Amazon itself. And in almost every department it sells in, Amazon has a noticeable presence.

In fact, Amazon completely dominates a number of departments, like Books, and CDs & Vinyl.

So, to determine Amazon’s selling status in each of its departments, we hired a small “army” of virtual assistants to comb through Amazon. Here’s what we discovered: 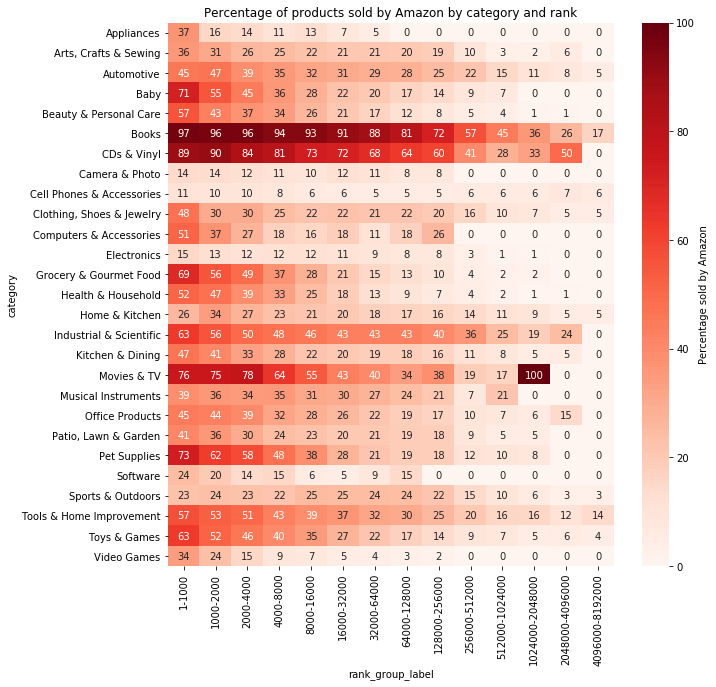 What this chart means:

For example, for books with a BSR lower than 1001, Amazon controls 97% of the Buy Boxes. That means only three out of 100 listings in that category and BSR tier have Buy Boxes owned by a third-party seller.

And looking more closely at the data, we can see that as BSRs increase, Amazon’s presence decreases until it’s nearly non-existent.

Keep in mind, though, that these aren’t exclusive Amazon products like the Echo, or products from its Essentials line. This data includes products Amazon buys and sells from first-party merchants.

How well do third-party sellers fare on Amazon?

As we did with Amazon, we collected data showing how well both types of third-party Amazon sellers perform. In case you need a refresher, the two types of 3P sellers are:

Similar to the Amazon FBA percentages chart above, the following chart demonstrates how well Amazon FBA sellers perform in each BSR tier: 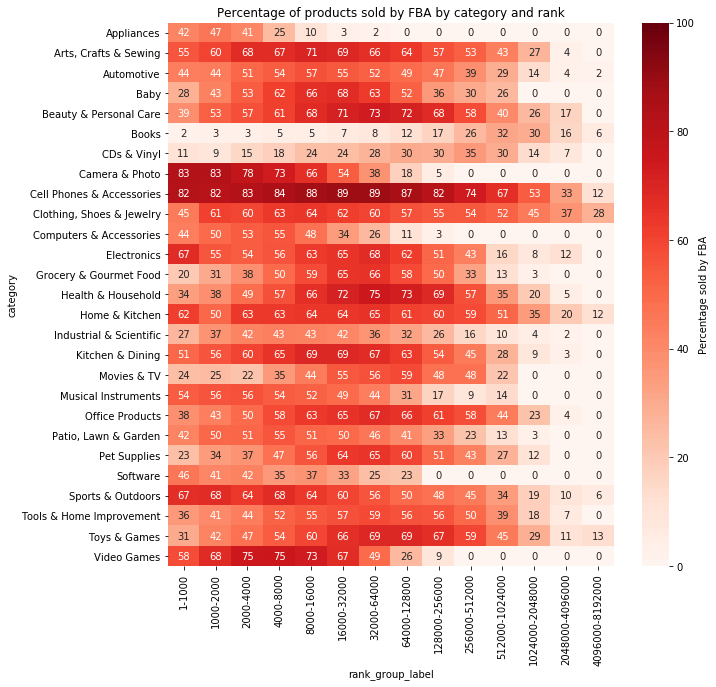 Next is the FBM performance chart. 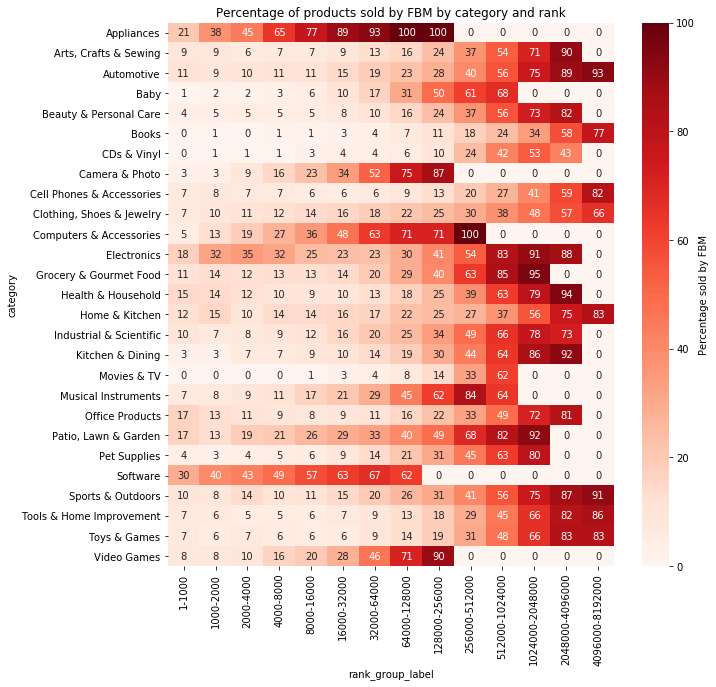 This chart stands in stark contrast to the first chart, almost appearing as a mirror reflection. The lower the BSR, the lower the presence of Amazon FBM sellers. Only at the far end of the spectrum for each department do FBM sellers show signs of strength.

The main exception is their strong showing in appliances, which is likely due (in part) to the high cost of shipping larger products.

What if Amazon purged first-party vendors?

Right now, we can only speculate on how Amazon’s so-called “purge” will play out. However, we can make some rough estimates based on the data we received.

For example, if Amazon stopped purchasing 1P products that have an average BSR of 16,000 and higher, in Kitchen & Dining, how would that affect the market?

But what does that mean in terms of real dollars?

Multiplying these values by the total number of ASINs removed for each tier, we get the following:

Finally, if the average price per product is $25.32, and we multiply that by the total units sold, approximately $29,625,159.60 in revenue would be freed up in the Kitchen & Dining category alone.

What does this mean for Amazon’s third-party sellers?

Assuming Amazon clears out first-party products with a BSR of 16,000 or higher, and the numbers I mentioned are accurate, this would create a nearly-$30-million-in-revenue opportunity for Amazon’s third-party sellers.

How many sellers? Well, let’s say that the average Amazon product has a gross profit margin of 20%. In Kitchen & Dining, using the numbers from earlier, Amazon’s “purge” could mean that $5,925,031.92 in profits would be up for grabs every month.

So, if the average Amazon seller earns $3,000 per month, this creates space for nearly 2,000 new Amazon FBA sellers–just in Kitchen & Dining!

But what does Amazon get out of this?

In the above example, it might seem like Amazon is losing out on millions in profit. They’ll quickly earn that back, however, by opening the doors to more third-party sellers.

In the same way that the average product earns its seller 20% gross profit, most sellers spend up to 20-25% of their revenue on Amazon PPC ads. Therefore, what Amazon loses in gross profit on the forfeited product sale, they soon earn back in advertising. Plus, they can collect storage fees, subscriber fees, and more.

Ultimately, though, this “purge” reduces Amazon’s risk as a seller itself.

Over the last couple of years, Amazon has won numerous court cases freeing themselves of liability for faulty, defective, or dangerous products sold in their marketplace. The blame was put upon its sellers and manufacturers.

Taking itself out of the picture with this “purge” further distances Amazon from potential legal trouble.

What can I do to prepare?

Of course, there is a lot of speculation in this article. And until the actual “purge” comes, we can’t know for sure how many opportunities will open up once Amazon steps away.

But, if even half of the suggested revenue and profit are freed up, expect to see a lot of excitement in the seller community.

That being said, the best thing to do now is to follow the news surrounding the potential “purge”. Research potential products in categories that Amazon could vacate.