Toward the end of every year, there are a few major holidays the majority of Americans celebrate. Thanksgiving on the fourth Thursday of November, and Christmas on December 25th, have been around for a long time.

But, within the last 30 years or so, the Friday after Thanksgiving — Black Friday — has become just as important as the other two.

What is Black Friday?

Dating back to the 1950s, Black Friday was coined by police in Philadelphia and Rochester to describe crowds and traffic conditions on the Friday following Thanksgiving.

These days, Black Friday has something of a consumerist holiday. It’s become a day that many retailers — both brick-and-mortar and e-commerce — offer up their best deals during the holiday.

As of this writing, retail giant Walmart is offering flatscreen TVs at 35% off on Black Friday 2019. Amazon has similar deals on mattresses normally priced at $900. Many of these deals continue past Black Friday through the weekend to Cyber Monday and beyond. 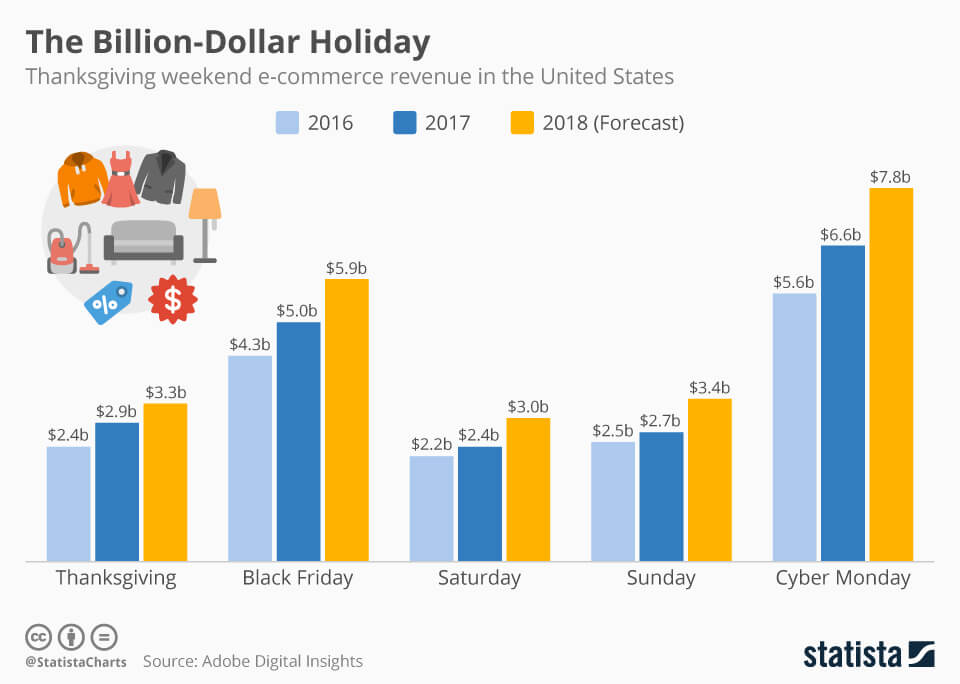 What is Cyber Monday?

In fact, Cyber Monday’s e-commerce sales numbers are roughly 25% higher than those for Black Friday (Statista).

Black Friday around the World: Which Countries Participate?

In recent years, the adoption of Black Friday has become more and more prevalent globally. Currently, of the world’s 195 countries, an estimated 50-60% “celebrate” Black Friday in some form or another.

For example, in Europe, the United Kingdom, France, and Germany all started to adopt Black Friday within the last three to four years. Central and South American countries have also started promoting Black Friday. China and southeastern Asia participate in Black Friday, and almost half of Africa celebrates Black Friday in some way.

*These countries have dedicated Amazon marketplaces.

Which countries don’t celebrate Black Friday around the world?

While doing research for this article, I took Wikipedia’s list of world countries organized by economic freedom and worked my way in reverse order through their list.

Unsurprisingly, many countries that are vocal in their opposition of capitalism and consumerism do not support Black Friday (or any other shopping holidays). That includes countries like North Korea, Venezuela, Iran, and Afghanistan.

Some countries like Tajikistan, however, simply don’t understand the reasoning behind Black Friday.

In a blog article on Kiva, the unnamed author recounts how he and Tajikistani friends watched American shoppers rush a Walmart store for its deep discounts.

“Was it free?” they asked in shock, not understanding why so many would storm a retailer just for a 30% discount. The cultural difference is apparent in the post.

For other countries that don’t support Black Friday, it’s primarily because they lack the financial freedom to do so. In fact, many of those places relate Black Friday to negative periods in their history.

Bangladesh, a country that provides manufacturing capabilities for many of the large U.S. retailers, holds protests on Black Friday. They oppose the high demands that come with the holiday.

Still, Bangladesh does have its own shopping festival. It happens around the same time as Black Friday and is called Fatafati Friday (it began in 2017).

In many countries, “Black Friday” has an entirely different historical meaning. Those Fridays have nothing to do with shopping, as in Burma. Black Friday in Burma is remembered as a day of massacre on May 30, 2003 (although, they, too, have started to hint at adopting the sales holiday).

Is Black Friday spreading around the world?

Amazon is the largest proponent for the “manifest destiny” of fourth quarter capitalism.

They have 14 dedicated Amazon markets worldwide: the United States, Mexico, Canada, Japan, Australia, the UK, Germany, France, Italy, Spain, Brazil, the UAE, India, and Singapore. Each of these countries has adopted Black Friday as a shopping holiday.

Plus, there are countries around the world that are affected by Amazon’s presence despite the lack of a dedicated market.

For example, Amazon’s fast shipping and deals on tech drive interest in sales in Ecuador. And ordering “off-island” is such a popular option in Guam/Micronesia, the local chambers of commerce have issued statements encouraging the population to shop locally before buying on Amazon or Walmart’s websites.

Perhaps the most surprising thing I learned about global Black Friday trends, though, is how quickly it’s spreading in unlikely areas. Two non-Amazon e-commerce retailers are examples of that, leading the “war” for Black Friday in Africa.

Jumia, often hailed as the “Amazon of Africa” has a presence in 12 countries in Africa including Egypt, Zimbabwe, Nigeria, and Ghana.

Then there’s Shoprite, a conglomerate that boasts Africa’s largest chain of retail stores.

It has grown its presence in Africa significantly, targeting the countries Jumia misses. Shoprite websites touting Black Friday can be found in Lesotho, Malawi, and Zambia, each with their own dedicated country-code domain extensions.

It’s worth noting that Jumia’s ecommerce origins versus Shoprite’s brick-and-mortar origins somewhat echoes the “Amazon vs Walmart” retail battle in the U.S.

What other sales holidays are popular around the world?

While it hasn’t gained much traction in the United States yet, Singles Day may be spreading just as fast from China to other parts of the world as Black Friday is.

Singles Day, seen as an “anti-Valentine’s Day” falls on November 11th each year. And like Black Friday and Cyber Monday, Singles Day is a major shopping day in China.

This figure is even more shocking when one considers that during Black Friday/Cyber Monday 2018, sales for all U.S. e-commerce companies combined (including Amazon and Walmart) totalled a little over $23 billion over the span of four days.

Spain and the United Arab Emirates — both countries with dedicated Amazon markets — have jumped on the Singles Day trend.

For that reason, it wouldn’t be surprising if the U.S. joined in the Singles Day action in 2020 and beyond. (If it kept with the November 11 scheduling, however, it would fall on U.S. Veteran’s Day; that would obviously generate controversy.)

Another busy time for global shopping holidays is in late December — the period after Christmas and before New Years.

The UK, Canada, Australia, Trinidad and Tobago, and New Zealand and other countries that once formed the British Empire celebrate Boxing Day on December 26th. Its name comes from when tradesmen would collect “Christmas boxes” of money or presents on the first weekend after Christmas.

Now, Boxing Day is primarily known as a shopping holiday, with similar deals to that of Black Friday and Cyber Monday.

Recently, though, a shift in retail figures have pointed towards Black Friday and Cyber Monday slowly surpassing Boxing Day as the biggest sales day in Canada. According to the London Free Press, 43% of Canadian shoppers plan on shopping on Black Friday this year versus 38% for Boxing Day.

What do major shopping holidays mean for e-commerce sellers?

For those who are in e-commerce, the 25% growth in Black Friday/Cyber Monday sales year-over-year offers more and more opportunities for retailers to profit during the holidays. Furthermore, expanding markets offer ecommerce sellers the potential to sell in the U.S. and in other countries as well.

And Amazon isn’t the only platform accepting new sellers in their non-U.S. markets. Jumia, the “Amazon of Africa,” has its own third-party seller platform.

By opening new sales channels like Jumia, sellers can increase profits and the reach of their brand.

We’ve also reported that Alibaba is hoping to expand its reach to the west as well. So, with Alibaba’s heavy investment in Singles Day (which would become even more popular if the U.S. adopts Singles Day in the future), it’s possible that U.S.-based Alibaba sellers could amplify their sales too.

3 comments on “Black Friday Around the World: Which Countries Have Major Shopping Holidays?”