Since early 2018, I’ve been recruiting for Jungle Scout. But if you had asked me where I’d be working in the spring of that year, Jungle Scout wouldn’t have been my answer.

References had been checked. My family and friends had been told.

All I was waiting on was the paperwork.

Then Jungle Scout reached out.

As I passed my time on LinkedIn, a message came in from my current manager.

After reading about the job offer, my first thought was, “What the heck is Jungle Scout?!”.

My second thought was, “People sell on Amazon?! That’s a thing?!”.

Clearly I was clueless about the booming Amazon-selling business. Welcome to 2018, Veerprit!

I didn’t want to throw away a sure thing for a company I knew nothing about though. So I did some digging and found an article written by my (now) co-worker, Dave.

He wrote about a company trip to Bangkok, and how once-in-a-lifetime opportunities don’t happen twice.

To say that it piqued my interest would be an understatement!

Therefore, despite my intended acceptance of the other job, I quickly set up an interview with Laura, Jungle Scout’s current Director of People Operations.

My initial reaction upon meeting Laura the day of the interview was that she was (and is) so lovely.

And with kindness going a long way in my book–in addition to the opportunity for growth and impact the role offered–I decided to continue on with the interview process.

After two more calls (one with Jared, VP of Engineering, and one with Shane, VP of Operations), and fifteen minutes after my final interview, I received a verbal offer.

And the paperwork? No waiting necessary!

It arrived soon after the offer was made, and BAM! That’s how my incredible journey with Jungle Scout began.

From the beginning, Jungle Scout’s rapid growth blew me away.

It’s still hard to believe I was employee number 50(ish), particularly when you consider that we’ve more than doubled the size of the company barely one year later.

As well, Jungle Scout is heavily involved in philanthropic projects.

We donate to Doctors without Borders. With Pencils of Promise, we’ve built schools in impoverished countries worldwide. For our troops, we offer veteran discounts. And for aspiring entrepreneurs, we offer scholarships.

Who wouldn’t want to work for a company that gives back?!

Plus, Jungle Scout is very culture-forward.

Each year, the company unites its three offices and remote team at Jungle Camp, for a week-long retreat. There, we bond as a team, watch presentations on the status of the company, and work hard at continuing to strengthen Jungle Scout.

But, despite all the good we’ve done (and are doing), back then there was one major area where we lacked strength: diversity.

Diversity at Jungle Scout: Where we were.

Before Jungle Scout, I was recruiting programmers at a video game studio. Prior to that, I was doing technical recruitment at an agency.

For that reason, it should come as no surprise that the majority of the teams I supported were predominantly male, and white. And this is a common statistic nationwide.

According to Data USA, in addition to an imbalance in average salaries, the ratio of male to female developers is 3.66 to one, and 71.3% of developers are white.

Jungle Scout was in a similar boat.

Frankly, the lack of diversity on the “Meet the Team” page was the only con on the pros/cons list I had made to help me decide whether or not to take the job at Jungle Scout.

Of course, the team’s uniformity made sense.

The engineering team didn’t have a recruiter. They were simply bringing on close contacts they had in programming circles.

Originally, the team focused on culture-fit, which isn’t unusual.

I know a lot of interviewers who ask themselves, “Is this someone I want to have a beer with?”.

While this seems like a good hiring strategy, it isn’t.

Not only do you miss out on some wicked talent, but it also results in a culture severely lacking in diversity.

So, to avoid repeating our past mistakes, Jungle Scout has made it a priority to always make decisions based on our values.

With these six values in mind, we moved away from culture-fit and towards values-fit and culture-add (increasing diversity and embracing new perspectives), quickly diversifying the team.

In just twelve months, we hired highly-skilled engineers who had different backgrounds and different perspectives.

Their unique experiences and personalities have ultimately allowed us to become more creative problem-solvers.

Looking around the Vancouver office today, I see people from Brazil, Kenya, Croatia, South Korea, Nigeria, the UK, and more.

Even our educational and professional backgrounds are different.

We have multiple PhDs, and people with no college experience at all. Some of us are just getting started in our careers while others own/owned their own business.

Engineering wasn’t our only focus for diversity either. We diversified our People Ops (Human Resources/Recruiting) team too. After all, a company can only be as diverse as the team recruiting the talent, right?

But we don’t just hire for diversity.

Our push to hire value fits over culture fits wasn’t solely about mixing it up.

Jared, Greg, and the team have set a very high bar. They won’t settle for anything less than excellence.

In fact, excellence is the standard across the board.

From Engineering to Marketing, and Customer Support to People Ops; we strive to find the best person possible for the job, no matter who you are!

Diversity at Jungle Scout: Where we are now.

At our last annual meetup Jungle Camp, where the entire staff comes together in one location, it was apparent we had matured as a company.

Check out this photo from Cartagena, Columbia: 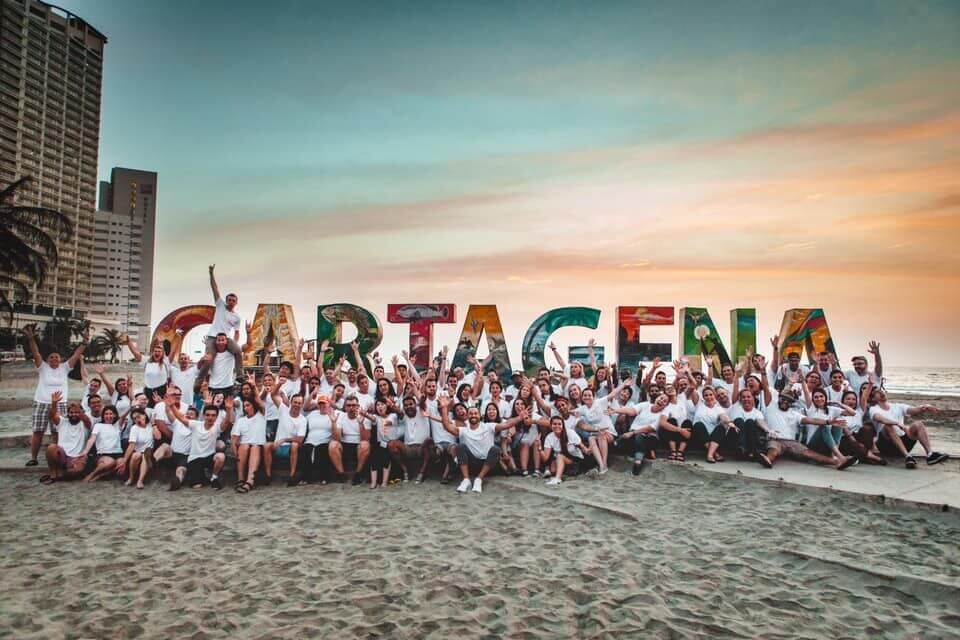 Our team flew in from 30 different airports from around the globe! You can see the diversity. And as cheesy as this is going to sound, we all have one thing in common: we LOVE working at Jungle Scout.

Others are noticing the change too.

Hear it from the team:

Here’s what some members of the team are saying about diversity at Jungle Scout:

“It’s been really illuminating working as one of the few female engineers at Jungle Scout.

“On the one hand, I never really think about my gender because everyone cares so much more about how good you are at your job.

“On the other hand, it’s inspiring to work with incredibly smart people who happen to come from majorly different backgrounds, cultures, and personalities to bring their voices to the table.

“It’s not always easy to manage the balance between the two, but Jungle Scout is getting there.”

“The diversity here at Jungle Scout is incredible, it brings together a huge variety of perspectives, which drives innovation and growth. Additionally, it fosters a really inclusive culture where your opinions as an individual actually matter.”

“Diversity is synonymous with our culture here at JS! I have an amazing team that is COMPLETELY remote, from all walks of life, as well as different backgrounds!

“The incredible part of this is that these 17 people are some of the closest friends/co-workers I’ve ever had the pleasure to manage! Even though they are all from different countries/cultures/time zones, they are all part of a wonderful family.

“We share our different cultures with each other almost daily and I have learned so much about places I’ve never explored personally, just by visiting with them each day while we work across TEN time zones!

“I have learned more about our beautiful world, simply by working each day with these fantastic people.”

Obviously, we have more to do.

Diversity is an ongoing passion project of mine, and of everyone who works here. And while we’re leaps and bounds ahead of where we were a year ago, we can still improve.

Here are some of our objectives for 2019 and beyond:

Our company is 45% female and composed of people from all over the world. Yet, our senior leadership level doesn’t reflect that same diversity.

We realize this is an area of opportunity though, and have made it an area of focus.

Like many tech companies in the United States and Canada, our engineering team is predominantly male, despite the fact that 45% of our workforce is female.

When it comes to our support team, however, the opposite is true. Men make up 55% of our company, but only three work in support. The team is 86% female and just 14% male.

Needless to say, we hope to add more females to the engineering team (and the company as a whole), and more males to the support team.

I’m excited about the future of Jungle Scout.  It’s rare to see a company as young as ours willing to pinpoint and address an opportunity like diversity.

We’ve experienced a lot of growth in the last four years, and have been able to build an impactful, industry-leading product. But never at the expense of the people behind the brand.

Our leadership team always puts our people first. It’s just one of many reasons why I’m so grateful to be working at Jungle Scout, and why so many people want to work here too.

So let me leave you with this: we hire people we can trust, and trust the people we hire.

This is how we do it:

Hope this piqued your interest the way Dave’s article piqued mine. And here’s to meeting you soon!