Hijackers are a plague. But, thankfully, Amazon is taking steps to remove them from its retail platform.

If you’ve never heard the term before, a ‘hijacker’ is another third-party seller who sells products on your listing. Often, these products are knock-offs, drop-shipped goods from competitors, or even your own product bought at a discount.

Regardless of the method, hijackers can steal the Buy Box from you, force a price war by listing their item lower than yours, and affect your overall status as an Amazon FBA seller.

In our exclusive Facebook group, Amazon Competitive Edge, we got some insights from sellers who have been affected by hijackers.

“Counterfeiter [was] selling [fulfilled by Merchant]. Limited buy quantity to two so [I don’t know] how many he claims to have. Tanked the price and took the buybox.”

“Had someone reselling my product they bought on giveaway sites. Only on my listing a day or two until they sold a few units. Once I ended giveaway I noticed no more hijackers.”

“I had six in Canada and four in the US that copied by listing. Once I was out of stock, they disappeared so I think they are drop shippers.”

Some even believe that Amazon itself is capable of hijacking the listings of its third-party sellers.

“Amazon’s retail team hijacked me and two others’ listing. They used my UPC (and two others) to merge three listings into one listing with three variations.”

The latter comments seem to be edge cases, however.

It can happen to anyone.

When Jungle Stix ran out of inventory following Prime Day 2018, multiple sellers leaped on our listing and started offering the product. We quickly noticed that the products were not ours, but were actually other Amazon products being drop-shipped via our listing.

You can learn more about what happened on our sister site, Forecastly.

How to prevent hijackers

There are two key methods for preventing hijackers on Amazon:

There is a light at the end of the tunnel though since it looks like Amazon is working to put an end to counterfeit goods. After all, their reputation is on the line too. They take a hit every time their customers receive counterfeit products.

So, to help prevent counterfeiters from selling fake products on another seller’s listing, Amazon recently started sending the following notification to sellers: 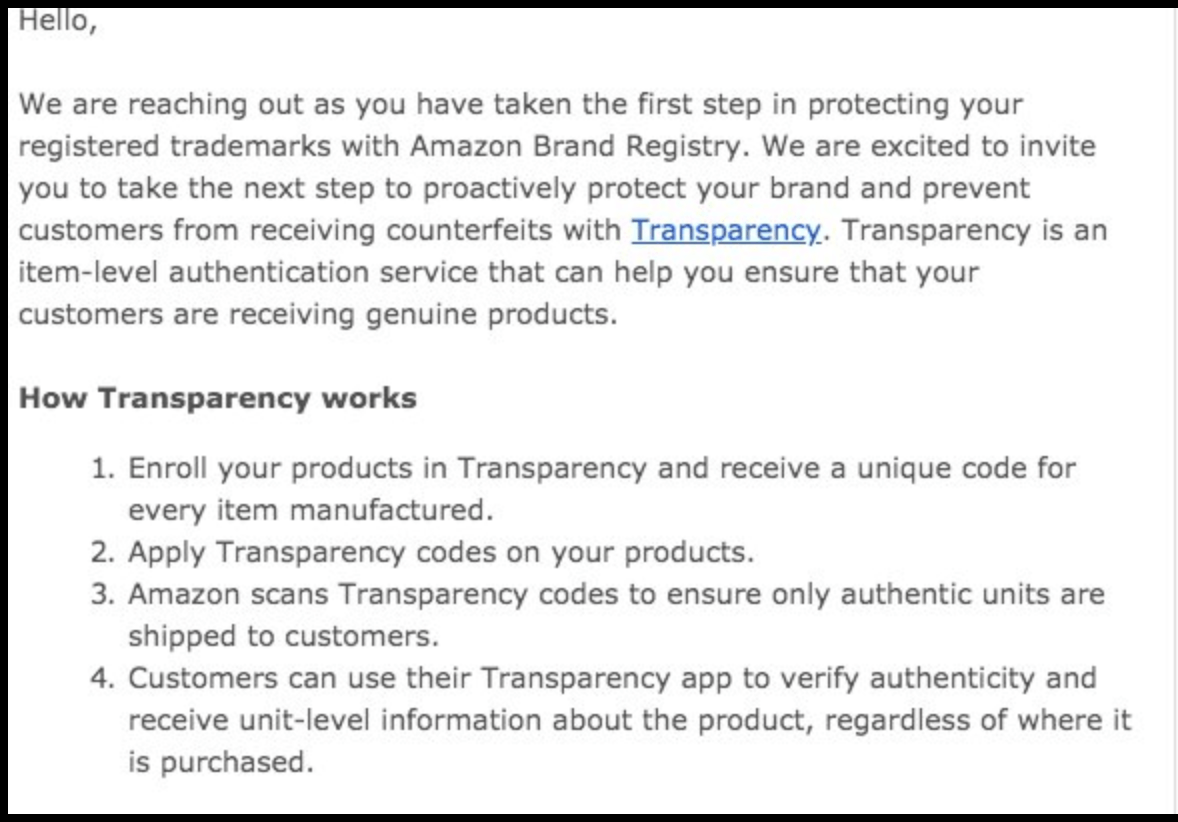 Greg Mercer, founder/CEO of Jungle Scout, said this about the new program:

I met with the guy who runs this program while I was in Seattle. The plus side is Amazon can verify that its not a counterfeit when they log it into their warehouse. The biggest downside is you pay $0.10 per label, and whoever creates the label has to have a special printer with access to their API. This actually doesn’t prevent other people from selling non-counterfeit items on your listings (e.g. something they bought at a discount) but it does remove counterfeits…

The good news is that the program helps remove counterfeit products.

However, the Transparency program solution increases costs for sellers and adds an extra step. Furthermore, it insists Amazon’s customers use the service.

So, while this may not be the best fix for this problem, it is a step in the right direction.

And even with added costs for sellers, it’s still better than having a product’s reputation and listing ruined by disreputable hijackers!

Want to get in on the chatter?

Let us know what’s important to you by filling out the following (anonymous) form: