Financial strain has curbed consumer spending throughout the COVID-19 pandemic. This has meant financial worry, income loss, and lifestyle changes for many people, including the 65% of U.S. consumers who say they’re living paycheck-to-paycheck.

Now, a year since intense social-distancing measures first took effect in the U.S., financial stressors continue to squeeze budgets. In response, Americans are finding yet more ways to shave down their spending, earn extra income, and set money aside for savings.

However, data from Jungle Scout’s most recent Consumer Trends Report reveals that, despite these efforts, many households face significant difficulties paying for everything from utility bills to thousand-dollar emergencies.

Let’s take a look at the most pressing financial challenges in 2021 and how Americans are rising to meet them.

Finances are strained in 2021

Strikingly, a large number of U.S. consumers bear significant financial worries in the near and far term, about factors both in and out of their immediate control. They are quite stressed with regard to their personal finances, and they’re anxious about broader economic instability as well.

For many, 2020’s financial strain reduced their ability to save money and shook their sense of preparedness for future expenses. While just over half of consumers have maintained the same income as last year, 22% are earning less in 2021 than they were in Q4 of 2020.

The number-one financial stressor in the U.S. is having enough emergency savings, with sufficient retirement savings coming in at a close second.

The top financial stressors among U.S. consumers in 2021

Among the data lies a palpable uncertainty regarding employment and investments: exactly half of Americans are stressed about existing or potential income fluctuations, and more than a third clock stock market volatility and losing their jobs as critical concerns.

Compounding health concerns about the coronavirus, 41% of consumers say paying healthcare bills is stressful in 2021.

Nearly half of U.S. consumers worry about paying recurring costs like utility bills and rent, and just as many are putting off major financial decisions like buying a home.

Meanwhile, a significant portion are grappling with debt, either from credit cards or loans, including student loans. For many, recovery feels improbable: 39% of Americans say they will always be in debt.

Underscoring these worries are data on Americans’ extreme financial precarity. Most U.S. consumers don’t have enough savings to stave off significant challenges if faced with an unexpected expense.

For instance, well over half (55%) of respondents said they could not afford an emergency expense of $500-$1,000 without receiving support.

If faced with such a cost, a third would have to borrow money to cover it, either from a friend or a bank, or by charging it to a credit card.

These concerns grow more alarming considering the incidence of unforeseen costs and loss of income over the past few months. 48% of Americans experienced unexpected financial setbacks at the end of last year, and 22% say their household incomes are lower now than they were three months ago.

The ongoing threat of a layoff or pay cut is serious: it would take 61% of Americans just six months to exhaust their savings following a significant loss or change in income. For 30%, that timeline drops to one month.

Unsurprisingly, then, a strong proportion (43%) of Americans say they were “extremely” or “very” reliant on government stimulus checks toward the end of last year. Furthermore, 23% received some sort of loan (e.g. federal, private, family, or student) in the last three months to make ends meet. Fewer than ten percent of Americans say they were “not at all reliant” on the stimulus money.

Consumers are changing their behavior…

Americans have not taken these financial concerns lightly. For one thing, they’re spending less money overall. They’re also putting more intention into what they buy.

The majority of consumers have adopted at least one of these money-saving techniques when shopping:

Americans are also working harder to pay their bills. 34% hold more than one job to make ends meet, and 70% of respondents are looking for additional ways to make money right now.

Among those who can afford to save money, many have ramped up their efforts—over a third of respondents are saving and investing more now than they were before the COVID-19 pandemic.

People are finding other ways to cope with the psychological burden of uncertain finances. They’re focusing on their families and pets, and taking care of their physical and mental health.

…and looking forward to stability

The excitement to resume pre-virus life extends not just to free activities like taking a hike or going to church, but also to expensive ones, like shopping for jewelry, flying across the country, or attending university. 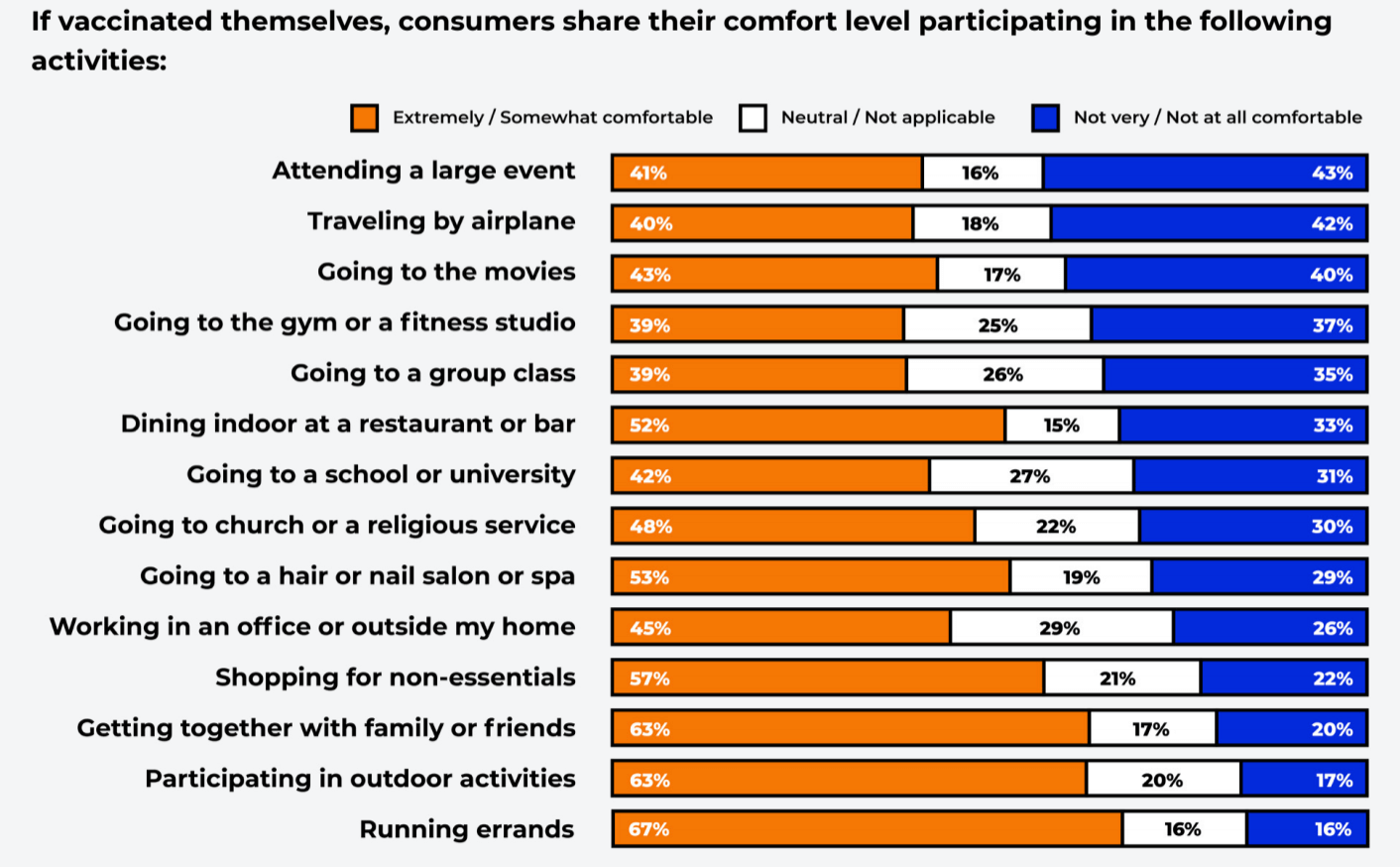 Whether most Americans will be able to afford such expenses remains to be seen. For now, they’re looking forward to simple pleasures like greeting family members after a long year apart.