Bloop! There goes Facebook messenger. Who’s it from? An old friend from my table-waiting days, Carl. Pretty randomly, I might add, since I probably haven’t spoken to Carl since ’07 or ’08. I half expect the message to be one of those goofy chain letters or an animated gif he found amusing, but no, it’s something quite different. Carl wants to teach me how to make money from home.

“Hey Carl, not much. Have a couple businesses going and a blog or two. You?”

“I just got into something pretty big, actually, that I’m excited to tell you about.”

“lol… no, actually it’s even better than that. Let me ask you this: what if I told you that I could teach you how to make money from home?”

From there, Carl went into a spiel about a new, top-of-the-line weight loss shake powder he was selling. Of course, it wasn’t the powder that he was trying to sell me, per se, but the job of selling the powder itself to other people. After about 20 minutes of this, I wished Carl actually was pitching cryptocurrencies to me.

Carl, like many who want to quit their jobs and do something for themselves got invested in a multi-level marketing platform (or as many call it, “a pyramid scheme.”)

“You’d be great at it!” he pitched. “With your marketing skills, you could probably clean house.”

As an Amazon seller, I had to give carl a pass. I’m a big believer that when it comes to shifting physical products, Amazon is the most lucrative way to go, with the lowest barrier to entry. I’ll explain why, but first, let’s take a look at MLMs.

What is a MLM?

Multi level marketing, or MLM, is a form of direct sales home business in which independent representatives sell goods and services from a company to an end consumer. The multi-level aspect refers to each representatives’ ability to recruit and train other representatives, and earn commissions on their recruited reps’ (also called the down line) sales. Popular examples include Herbalife, Amway, Lularoe, and Rhodes + Fields.

How to make money with a MLM.

Many multi-level marketing schemes will advertise that there’s plenty of ways how to make money with MLMs. In reality, there’s only two major ways to make money doing MLM:

Long story short, if you ain’t recruiting, you ain’t making money. And even if you are recruiting, it’s still not a certainty that you will be able to quit your job and work from home. Kinda like Carl.

A common story in the MLM world.

So, Carl got recruited and spent $300 in product. Then he worked to recruit two of his buddies into the organization (over 30 different people turned him down, by the way), each of them spending their own $300 to get in. But with only $900 total in products purchased between Carl and his down line, Carl’s commission tier was at a low 6%, so he earned a pitiful $54.

Fortunately, Carl was able to move about 30% of his products to end users, but because of the tough market, he had to discount the goods at 35% off retail, so he made another $97.50 in revenue. Not to mention that these sales took him roughly 30-40 hours of bugging friends and family to get. This means that Carl, after subtracting that initial $300 to get things going, loss nearly half his initial investment.

Unfortunately, it doesn’t get any better.

Going into the next month, only one of Carl’s recruits stuck around. And Carl didn’t have any more friends and family to pitch, so he dug up old contacts–like that dude, Dave he used to work with 10 years ago. Oh yeah, and he then he had to buy another $300 in product to qualify as an active rep. And his end users churned roughly 75%, failing to re-up their purchases with him. That second month, Carl lost $250, and was now in the hole for $400. Plus, his garage was filling up with unsold products.

Of course, this is just one example. Each company has different metrics. But this is a common reality for many people at these organizations. That’s not to say that some people can’t make the system work for them, but in a broader sense, only those at the tippy top are making the big money.

I don’t want to call it a pyramid scheme, but if the shoe fits…

The SEC defines a pyramid scheme as a business model that has a “complex commission structure. Be concerned unless commissions are based on products or services that you or your recruits sell to people outside the program. If you do not understand how you will be compensated, be cautious.”

If you’re asking yourself, “Why the hell would anybody would ever do this?” don’t worry, we’re right there with you. After all, we’re in the business of teaching people how to make money, not how to lose money.

That’s exactly what I tried to do with Carl.

Bringing Carl to the other side.

After about three or four more pitches, I finally stopped Carl and told him that he needs to think about another business model. I told Carl about how I started my Amazon business back in 2015.

Back then, all I had was about $500 worth of books I bought in a parking lot of a Carl’s Jr. (no relation) and my comic book collection. As sales came in, I continued to build the business and try out different methods of Amazon selling. Next, came retail arbitrage and online arbitrage. And eventually, I dropped those for private label.

I used the Web App to find my winning PL product, how about you?

That’s where I broke down the entire private label process for Carl.

“You find profitable niche products on Amazon using a software program called Jungle Scout. Then, you source those products with a manufacturer overseas. After negotiating the deal, you launch your products on Amazon and market them. Amazon’s fulfillment centers do all the inventorying and shipping for you.”

From there, I gave him one resource after another. Scott Voelker videos. Jungle Scout blogs. My own offer to coach.

When I first heard about Amazon private label and the kind of money you can make–my first private label product has made roughly $1500/month in gross profit since I first launched it in 2016 and my best-sellers do as much as $4,000 per month–I was like, “Oh hell yes. I’m doing this forever.” For me, it’s a total no-brainer. When it came to ways on how to make money, there was nothing that even came close to it.

Look at the facts:

Plus, you do not have to rely on marketing to your friends and family on Facebook as Amazon has a huge audience of qualified shoppers ready and waiting for you.

As an entrepreneur, Amazon private label is a dream. And MLM, frankly, sounds like a total nightmare. But to be fair, MLM is quite different than other money-making methods. In fact, multi-level marketing and entrepreneurship exist in two entirely different worlds. MLMs exist within a world of social norms. Meanwhile, entrepreneurs exist within the world of market norms. 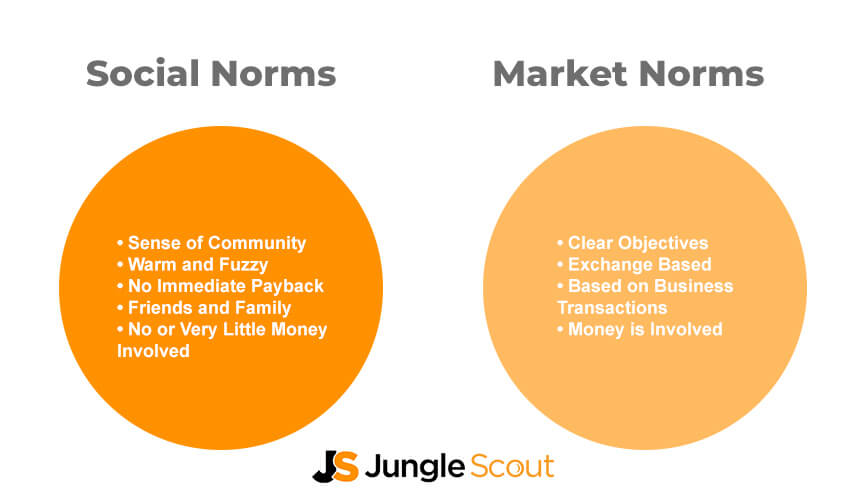 Behavioral economist Dan Ariely wrote in his awesome book Predictably Irrational that “social norms are wrapped up in our social nature and our need for community. They are usually warm and fuzzy.”

This fits in perfectly with the MLM world, where it’s normal for the founders to throw rock concerts for the community and send out inspirational videos. It’s all about being a part of something big.

For the entrepreneur, market norms deal with “wages, prices, rents, interest, and costs-and-benefits.” It’s profit and loss statements, cost-of-goods sold, conversion rates, and ROI. The not so warm and fuzzy stuff. It’s all about “how to make money” and less about “how to feel good.” Like Ariely wrote, “when you are in the domain of market norms, you get what you pay for–that’s just the way it is.”

Is being part of a social norm a bad thing?

There’s absolutely nothing wrong with being part of a social norm! Humans are social beings. It’s what’s kept us together since we were painting on cave walls and helped us get to where we are today. And not everyone is motivated by things like financial freedom, high net worth, and the ability to create things. Many simply want to feel the “warm and fuzzy” sensation of being part of something.

With MLM, you can get just as much out of it without ever seeing a profit. It’s not uncommon for many MLMers, like my friend Carl, confabulate a story wherein one day things will work out. “It’s just a cost of doing business,” he told me when I asked him why he kept buying product if he’s not seeing a profit. “But I project in 12 months I’ll be driving a Ferrari.”

I wish I could tell you that it’s always sunshine and kittens as a private label seller, but that’d be false. Like any business–real business–there’s challenges, such as:

How to make money: comparing MLM and Amazon Private Label.

Again, if paying $300 a month to be a part of a group and go to “free” rock concerts and recruit your friends is what you’re into, then multi-level marketing is it for you. No matter how many spreadsheets, charts, and bank statements I waved in front of Carl, I couldn’t separate him from the social norm lifestyle. That’s what he wanted and it made him feel good. “I’m just going to stick with this for now, but if I change my mind, I’ll contact you.”

On the other hand, if huge profits, your own brand, and the freedom to do whatever and go whereever you want is attractive to you, check out Amazon private label. Of all the ways I know how to make money, it’s been my favorite for a long time.

Amazon Private Label is a process of creating your own branded products to sell on Amazon. The average product, researched and sourced correctly, should earn between $8-$12 per unit and sell 300 units per month (average product brings in $3,000/month in gross profit). Furthermore, Amazon’s fulfillment network does all the storing, picking, packing, shipping, and handling customer service on your behalf, so it doesn’t take a whole lot of effort.

Finding a product that is HIGH in demand and LOW in competition doesn’t have to be hard, yanno?

If you’re interested in learning more about how to make money with Amazon, then here, at Jungle Scout, we offer free information on the process of researching, sourcing, launching, and marketing private label products.

Check out The Genius Series below.

7 comments on “MLM vs Private Label (What’s a Better Way to Make Money?)”