Doner kebab and kofta aren’t the only wildly popular Turkish imports in the U.S. American consumers buy plenty of Turkish-made glass, fabric, and electronics, too.

Much of what the U.S. imports from Turkey originates in Istanbul,  the country’s largest city, industry hub, and primary seaport. Istanbul’s manufacturers are as busy as ever—the city’s largely industrial economy accounts for roughly 31% of Turkey’s GDP. U.S. consumers are familiar with the output, whether they know it or not; Istanbul-made products are widely available in the U.S. Amazon marketplace.

How has U.S. trade with Turkey changed over time, what kinds of products does the U.S. import from Turkey, and how might this relationship change in the future? Let’s dive into trade data from Jungle Scout’s 2020 Global Imports Report. 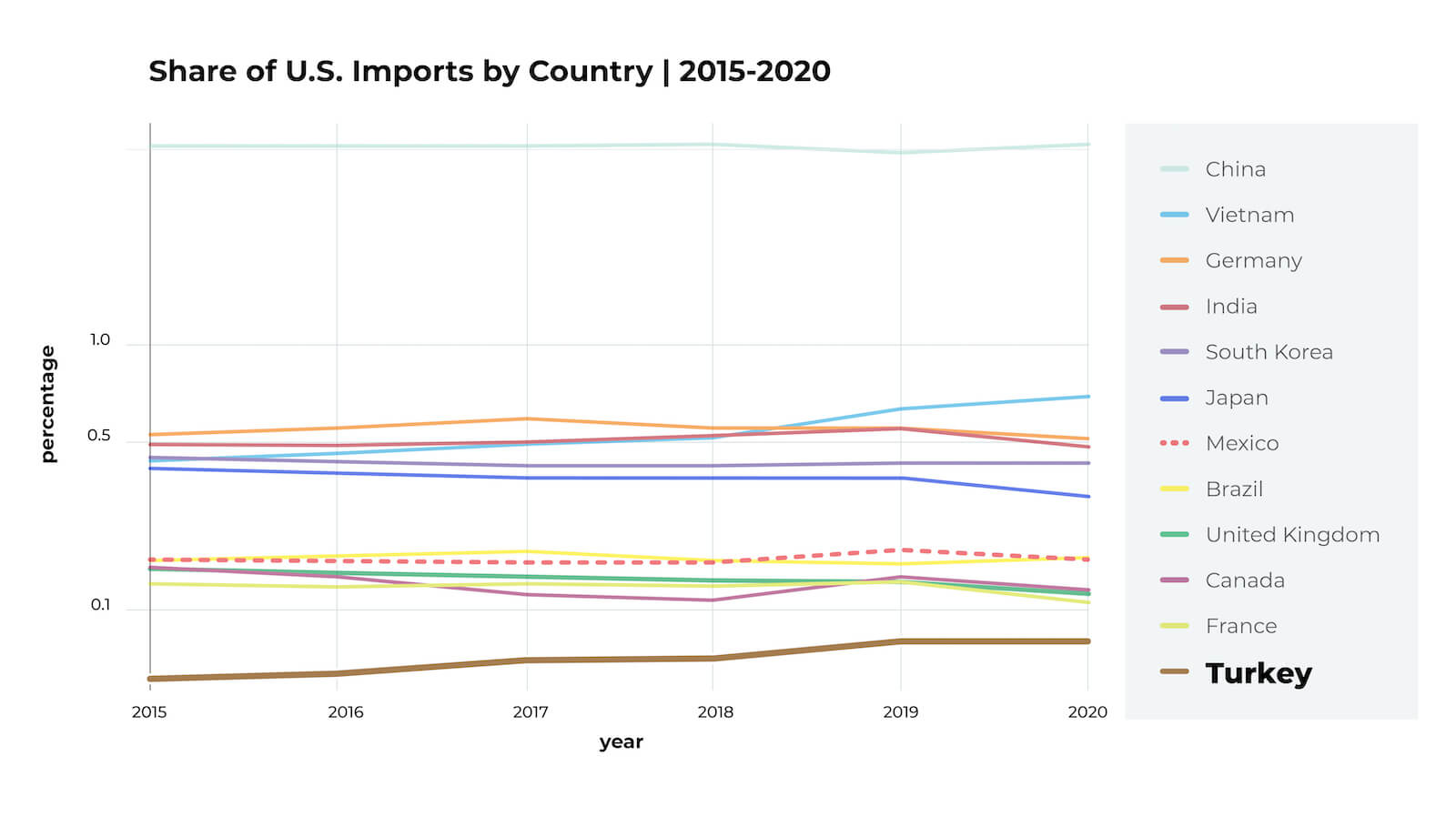 While the U.S. imports far fewer goods from Turkey than from its larger trading partners, Turkey accounts for a larger share of U.S. imports than any of its bordering neighbors.

From January to June 2020 alone, the U.S. imported nearly five times as many products from Turkey than from Greece, the next-largest trading partner in the region.

What kinds of products does the U.S. import from Turkey?

Turkey’s top five import categories include Stone & Glass, Textiles, Machinery & Electronics, Metals, and Mineral Products. Together, these goods make up 62% of what the U.S. imports from Turkey.

Using Jungle Scout’s Supplier Database, we can see which products sourced from Turkey are popular in the U.S. Amazon marketplace. Here are a few, grouped by import category.

Stone and glass products, like marble tiles and drinkware make up 19% of U.S. imports from Turkey.

On Amazon, consumers can buy Turkish glassware from Waterford Crystal, a company that sources its crystal tumblers, vases, and picture frames from a supplier in Levent, a commercial district of Istanbul.

Textiles like fabric, bedding, and clothing make up 15% of U.S. imports from Turkey.

Britannica Home Fashions, which creates bedding for brands like UGG and Pendleton, sources its fabric from Istanbul’s Şişli neighborhood.

Machinery and electronics make up a tenth of U.S. imports from Turkey. This includes industrial machine parts American shoppers can purchase on Amazon.

Predicting the future of U.S. imports from Turkey

Turkey’s consistent growth in share of U.S. imports over the past several years, as well as its prolific production of the U.S.’s most-imported goods, indicates that it will likely remain a sizable trading partner with the U.S. in the future. Two of Turkey’s top three largest import categories, Machinery and Textiles, consistently make up the largest and third-largest import categories for the U.S., respectively.

Its relatively strong recovery in shipment volume to the U.S. during the 2020 COVID-19 pandemic also indicates further growth.

Despite COVID’s disruptive effect on global manufacturing and supply chains in the first six months of 2020, U.S. imports from Turkey decreased by only 6% overall. Compared to the dramatic reductions in U.S. imports from its northwestern neighbors France, Germany, and Italy, Turkey fared well in terms of trade with the U.S last year.

The U.S. also increased its imports of Turkish Wood Products, Transportation, and Animal Products in 2020.