The COVID-19 pandemic, a precarious global economy, and political tension in the runup to the 2020 United States presidential election have set the stage for an unusual holiday shopping season.

Jungle Scout’s 2020 Consumer Trends Report provides insights into the consumer behaviors we can anticipate as we enter the final stretch of this unprecedented election year.

For one, U.S. consumers say they will significantly modify their holiday spending depending on the outcome of the U.S. Presidential election, and other current political issues including the U.S. Senate race, a new Supreme Court Justice nominee, and a potential new stimulus package may sway American consumer behavior in the coming months.

This report will explore projected holiday spending among U.S. consumers based on these key political events, as well as shopping preferences and behavioral differences between voter segments.

When asked whether or how their holiday would change based on a number of these political scenarios, consumers (and voters) gave the following responses:

How will consumer spending change if Joe Biden wins the election?

“If the Democrats and Biden win, I think the economy will take a long time to recover. I think this because they support continuing COVID restrictions, which has a negative economic impact and increases unemployment.” -Trump voter

“If Joe Biden wins the Presidential election, I will feel more optimistic and hopeful about the future, and will be more encouraged to spend, especially if the Democratic Party wins the majority in the Senate.” -Biden voter 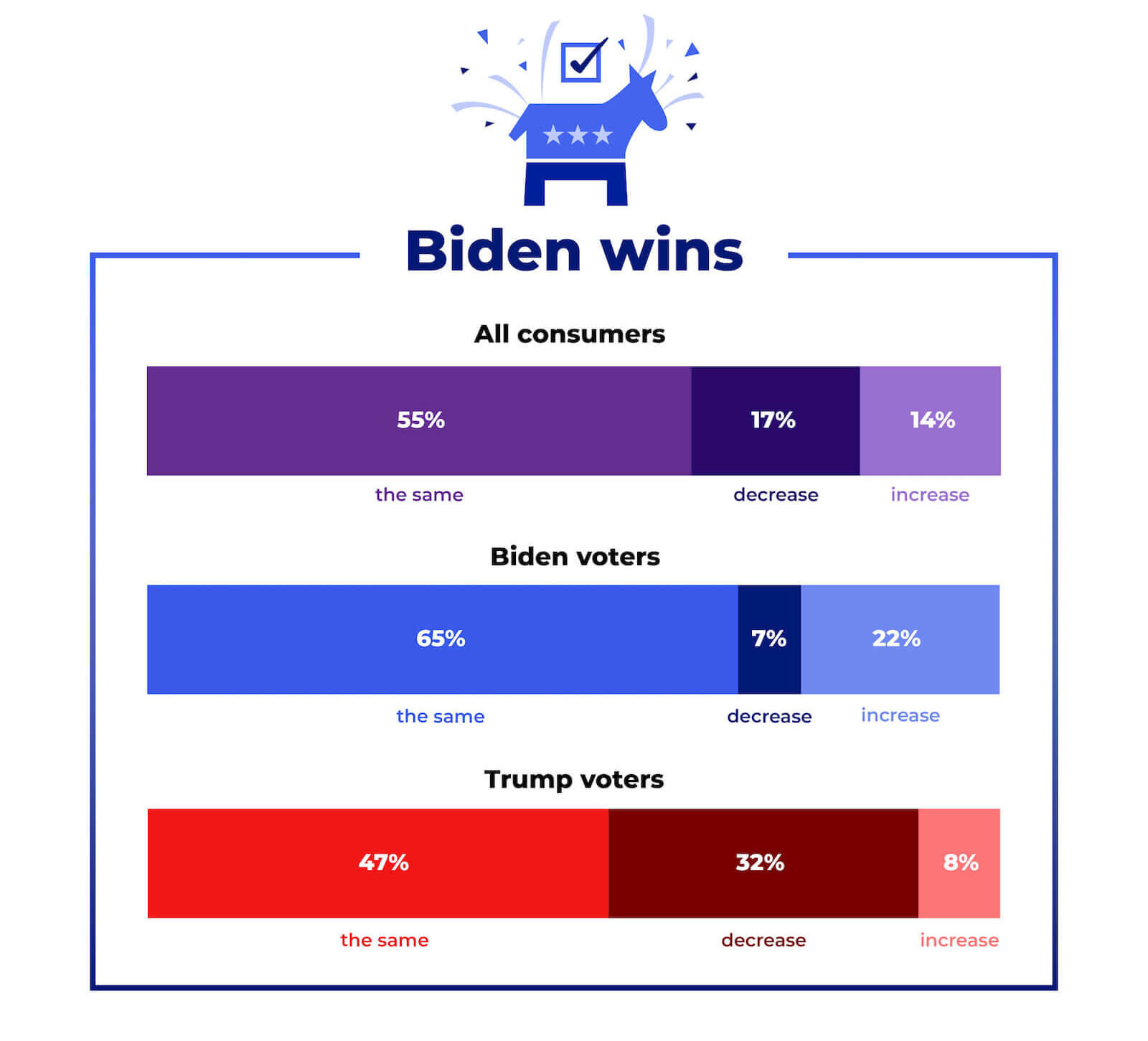 How will consumer spending change if Donald Trump wins the election?

“If Trump wins i believe there will be major depression and i’ll need to save every penny for who knows how long.” -Biden voter

“I think the economy will get better with President Trump.” -Trump voter 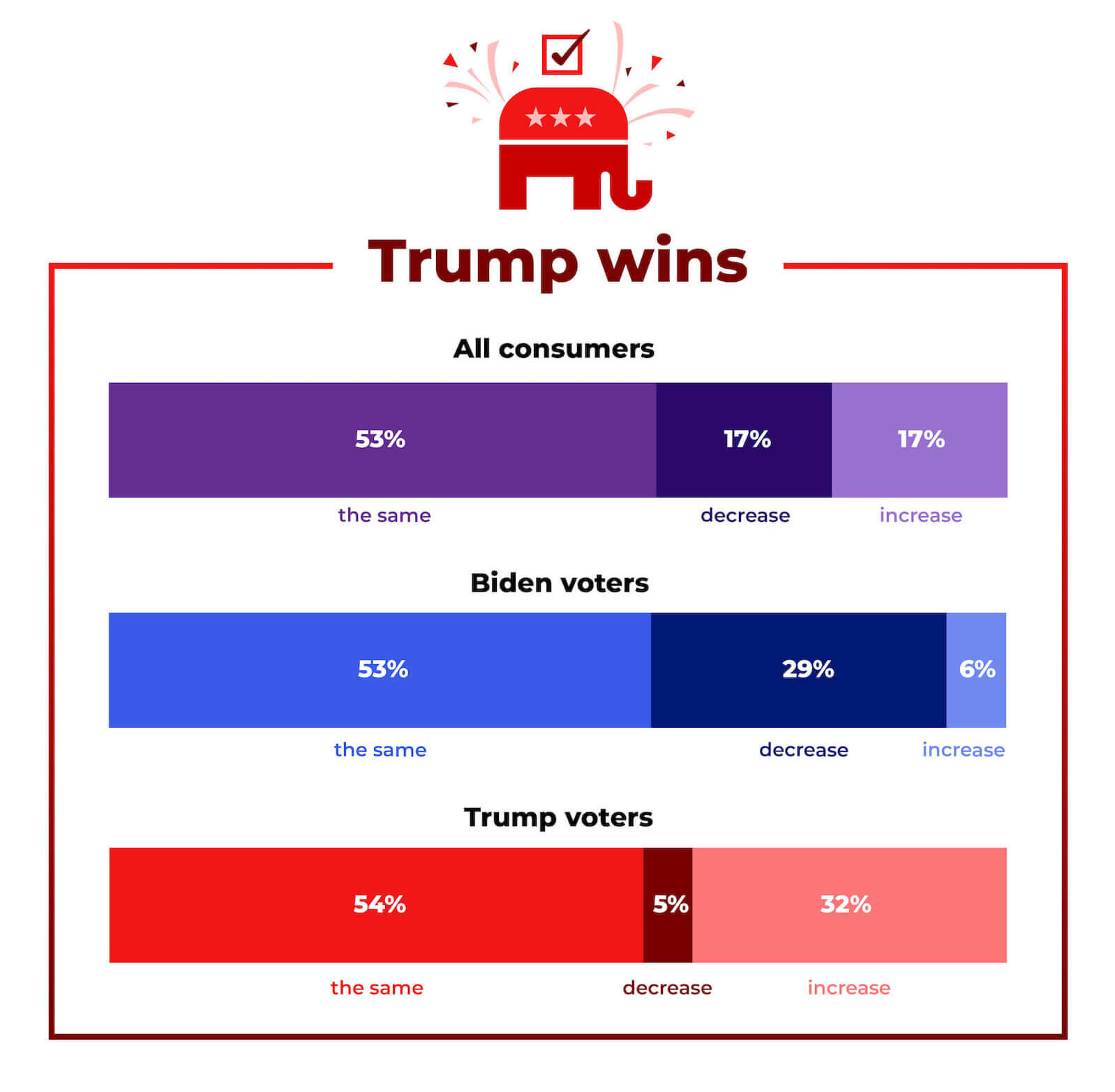 How will consumer spending change if the Democratic Party wins the majority of the U.S. Senate seats?

“I am already struggling with money. If Biden wins and the Senate flips, I will probably be able to look forward to some sort of government aid, even if it comes in February of next year. If Trump wins, and the Senate doesn’t flip, I know not to expect any.” -Biden voter

How will consumer spending change if Congress does NOT approve a new stimulus package?

“I don’t have excess money to spend, no matter who wins or loses, but a new stimulus check would certainly help me and help my local economy.” -undecided voter

“I don’t think that any politics will affect my spending too much, however without some stimulus money I might need to decrease spending.” -Biden voter

How will consumer spending change if Donald Trump appoints a new U.S. Supreme Court Justice in 2020?

“As long as we don’t lose our current income, our spending will stay the same.” -Biden voter

What are they buying?

Where do they shop?

“My concern about the election is violence from either side depending on outcome of election. If there are lockdowns, looting, etc. – I will definitely shop more on-line.” -Biden voter

Where do they start their online search for products?

Who is the bigger online shopper?

How will they shop for the holidays?

“If Joe Biden wins, I’d be very happy to spend money on gifts for myself, just to celebrate. But, Donald Trump wins re-election, then, I’d feel less willing to celebrate by buying gifts.” -undecided voter

“I don’t let outside circumstances that I have nothing to do with affect my choices and what I spend money on.” -undecided voter

Between October 1-2, 2020, Jungle Scout conducted an anonymous survey among a panel of 1,002 U.S. consumers about their buying preferences and behaviors. Respondents represent every U.S. state, all genders, and ages 18 to 75+, as well as all employment types and varying income levels.

At the conclusion of the survey, respondents were asked to identify by political affiliation (36% Democrat; 34% Republican; 22% Independent; 8% combined “Other” and “Prefer not to answer”) as well as who they were intending to vote for in the U.S. Presidential election (41% Joe Biden; 39% Donald Trump; 20% combined “Undecided,” “Prefer not to answer,” “Do not plan to vote,” or “Plan to vote for a candidate other than Joe Biden or Donald Trump”).

The full report, featuring all consumer trend and behavior insights for more than 1,000 U.S. consumers, will be published in November 2020. Click here to receive yours.

Jungle Scout is the leading all-in-one platform for selling on Amazon, with the mission of providing powerful data and insights to help entrepreneurs and brands grow successful Amazon businesses.

For more information, specific data requests or media assets, or to reach the report’s authors, please contact us at [email protected]