In the time of COVID-19, it may be hard to tell the difference—social distancing orders and store closures have fueled a surge among ecommerce marketplaces in the past year. And while the majority of consumers can’t help but shift from shopping in-store to online, a group of devoted consumers have distinguished themselves as true Amazon superfans.

Roughly 15% of U.S. consumers report making purchases on Amazon seven or more times per week. They shop on Amazon at least once a day, every day—and their appreciation for the ecommerce platform is only growing.

What are the traits and habits of shoppers who appear to be addicted to Amazon? We’ll examine why they shop on Amazon so frequently, how they spend, and the extent to which reliance on the Everything Store has increased—for virtually all consumers.

Throughout 2020, consumers reduced their in-store shopping in favor of socially-distanced, online spending. Though COVID-19 vaccination is now underway and brick-and-mortar retailers are opening back up, this trend continues in 2021. Amazon has emerged as the favorite retailer in the U.S.—particularly among a key group of consumers who now shop at the Everything Store daily.

These consumers aren’t just frequent shoppers—they’re Amazon superfans.  They spend more money on Amazon and think more favorably about the company than the average consumer, often to a dramatic degree. Whereas American shoppers typically vary their purchases among stores (physical and digital) and hold more faith in the eventual return of brick-and-mortar retail, daily shoppers are generally content with the idea of shopping exclusively on Amazon for the foreseeable future.

Consistent with a general trend among U.S. consumers, Amazon superfans have in large part decreased their overall spending since COVID began. However, daily shoppers now spend more frequently and liberally on Amazon. In fact, they are 50% more likely than the average consumer to have increased their Amazon spending since Q4 of 2020.

At first glance, one could chalk up a daily Amazon habit to a pressing need. After all, 80% of daily Amazon shoppers say Amazon has provided products they could not get anywhere else during the pandemic (compared to 59% of all consumers who say the same).

Additionally, Amazon superfans are busy with their jobs and families. Over half work full-time outside of the home, and 61% are parents.

Daily shoppers are also feeling the pinch of financial strain in the COVID economy. 60% make under $75,000 in household income, and well over half worry about their job security and having enough money to pay rent and utilities. Every dollar counts for this segment of consumers, so they choose their retailer wisely.

To this end, superfans take pains to optimize every purchase:

Amazon meets daily shoppers’ needs in ways other retailers haven’t. Superfans value Amazon for the convenience it offers, and because it carries their favorite brands at lower prices and provides fast (and often free) shipping.

Amazon has leaned into its one-stop-shop advantage and offers products in every conceivable category, from grocery to gardening. Accordingly, many consumers feel they really don’t need to visit a store to get everything they want.

It seems this group just really loves shopping on Amazon; 82% of superfans think Amazon is a good company for consumers (compared to 74% of consumers overall). They’re not alone in their overall appreciation for the Everything Store—only in the extent of their fandom.

The rise of ecommerce affects everyone

To truly understand Amazon-addicted shoppers, we have to view their behavior in context of the current state of retail and how consumer behavior has changed since the beginning of the COVID-19 pandemic.

Here’s the nutshell version: consumers have shifted en masse from shopping in-store to online over the past year, accelerating ecommerce’s emerging dominance in retail. As stores closed or limited their occupancy to reduce virus transmission, consumers suddenly traded fitting rooms and hand-picked produce for digital shopping’s conveniences—as well as its disadvantages, to varying levels of satisfaction.

Not all large retailers fared equally well among consumers, even those with existing online channels, like Walmart and Target. Consumers in general show a preference for Amazon over comparable retailers. 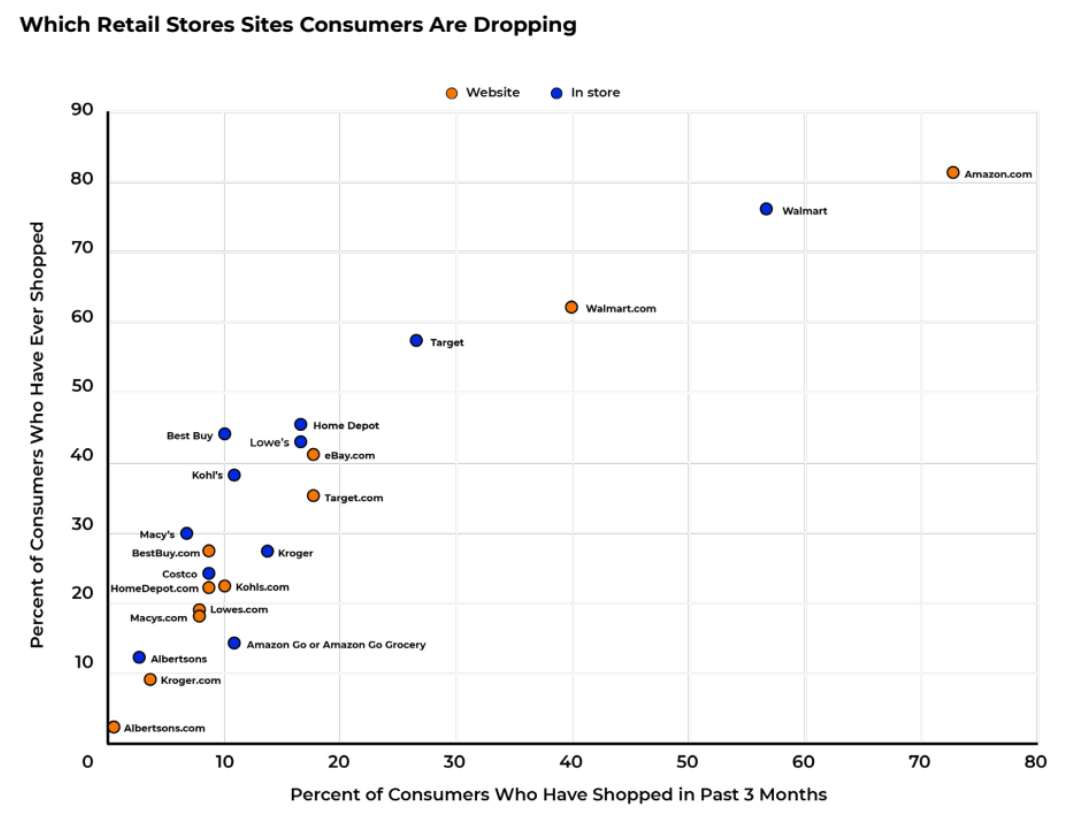 Amazon’s edge on other retailers largely comes down to its vast product catalog, fast shipping, and a robust review program that allows customers to find high-quality products.

Many shoppers took to Amazon and haven’t looked back, both increasing their online spending and adopting a rosier overall outlook on the company. But as we’ve seen, daily Amazon shoppers have taken this to an entirely different level.

There may be more Amazon superfans in the future

Given ecommerce’s growth and Amazon’s considerable lead as U.S. consumers’ preferred retailer, the ranks of shoppers who seem addicted to Amazon may expand over the next few years.

Consumers are likely to maintain their shift from in-store to online shopping even after the COVID-19 pandemic ends, meaning ever more dollars spent online—and likely on Amazon.