Roughly a month ago, Amazon released a beta tool for sellers called Amazon Posts. As Amazon describes it, Amazon Posts allows sellers to “use curated photos to inspire shoppers to engage with your brand and products on Amazon.”

While it may seem like this came out of nowhere, we reported on Amazon’s move to create a tool with similar functionality a year ago. At the time, the tool was known as Amazon Scout.

While this tool is still in the very early stages, we decided to take a look at Amazon Posts and explain why we feel like this tool might be a game-changer — and why it might not be.

What is Amazon Posts?

Posts is a new Amazon feature that allows shoppers to focus on brand shopping. Through a feed similar to those created by social media platforms like Facebook, Pinterest, or Instagram, Posts allows shoppers to discover new brands and see what’s new from brands they like.

To access Posts, a shopper needs to find your listing, scroll through the carousel, then tap on a post to enter a feed.

You can learn more about Amazon Post’s on Amazon’s advertising homepage.

Counting down from 10 to one, these are the reasons why we think Amazon Posts might be (and might not be) a game-changer.

A big part of Amazon’s retail strategy is its PPC (pay per click) advertising network. Through PPC, Amazon sellers can purchase ad space which helps give their products greater visibility.

With Amazon Posts, sellers could turn their attention away from the social media and search engine platforms competing for its advertising dollars, placing their focus instead on creating a bigger brand experience for their shoppers.

Not only would this increase Amazon’s retail advertising market share, but it’s already making things easier for some sellers, since they can operate their social media listings from within Amazon Seller Central.

9. Not a Game-Changer: Shoppers May Not “Go Down the Rabbit Hole”

Will shoppers want to move away from Amazon, especially if it looks like they’re going to a social media platform?

According to data by ContentSquare, only 15% of shoppers scroll down to the bottom of a page’s footer. That’s a meager number. And there’s no guarantee that that 15% will even click on the carousel to go to Amazon Posts.

For example, let’s say that an average product page gets 1,000 impressions per day. Out of that 1,000 impressions, only 150 see the carousel and only 20% of that 150 will click on it to open posts to related products.

Is messing with a tool like that worth a mere 30 impressions per day?

Compare that to other social media channels. My brand’s Facebook page has 11,000 followers, and even the worst post will bring in 150 impressions per day. My best reaches heights of 5,000 or more.

In major recent news, Nike has ended its partnership with Amazon. In a scathing soundbite, Jeffries analyst Randy Kolnic told CNBC, “Amazon is just a traffic aggregator that reduces friction in consumption. It doesn’t build communities.”

CNBC suggested that brands don’t need Amazon as they can build communities elsewhere. But by adding Amazon Posts — less than a week after the Nike’s departure — it shows that Amazon, does, in fact, want its brands to build communities on Amazon.

Need proof? The word “brand” appears no fewer than 40 times out of fewer than 1000 words on the web page for the new tool.

7. Not a Game-Changer: It Won’t Solve All of Amazon’s Brand Problems

It certainly appears like the new Amazon Posts tool is Amazon’s answer to brands departing the online retail giant. However, it feels more like sleight of hand, rather than an actual fix to its biggest problem, which is that Amazon doesn’t share its customers with its third-party sellers.

Last week, Amazon introduced another new feature for sellers: the ‘Request a Review’ button. This button allows its sellers to send an automated email follow-up for a product review on Amazon. And while this might seem like a great feature, it’s likely that the new tool seeks to replace a seller’s ability to speak directly with Amazon’s shoppers.

In fact, we anticipate that Amazon may remove the seller-messaging system altogether.

Meanwhile, Amazon’s competitor Alibaba has told its potential third-party sellers in the U.S. that it will allow them to have complete access to their customer bases.

So, the question remains: how can a third-party seller on Amazon’s retail platform expect to build a brand if they can’t develop a relationship with their customers?

Currently, the internet consists of many disparate threads. When you log onto your desktop, laptop, or smartphone, you’ve got apps for social media, links for email, and then your shopping networks. It can be a lot to juggle.

But, with Amazon introducing its own social media-like tool with Posts, we can see Amazon looking to be the one-and-only tool that people use when they log on.

It’s not that unusual either.

Arguably, Facebook has already made moves towards this, adding in its own streaming tools, marketplaces, messaging system, and crowdfunding services.  And in China, global powerhouse Alibaba is not just the Amazon of China, but the Ebay and PayPal too. Plus, Alibaba launched its own social media platform Real Ruwo targeting college students earlier this year.

5. Not a Game-Changer: It Might Be the Next Google+

Google+ was Google’s own attempt at creating a social media platform, and the move seemed like a no-brainer for the search engine giant. Not only is Google the most accessed site on the internet, Gmail is the second most popular email provider in the world behind the iPhone’s own email service (which often links to Gmail anyways).

A social media platform should have been a home run. But, of course, it wasn’t. In April of 2019, Google shut down their social media “experiment.”

According to a series of tweets from Google+ lead project manager, Morgan Knutson, “Google’s product vision of Google+ was based on the fear of losing the race (and all of the world’s data) to Facebook instead of creating something genuinely unique.” (IndiaToday)

As I noted above, Amazon’s addition of Amazon Posts is likely less about creating something unique, and more of a reaction to Nike’s premature exit from their partnership. Furthermore, Amazon Posts bears an eerie resemblance to Facebook’s pic-heavy social network, Instagram. 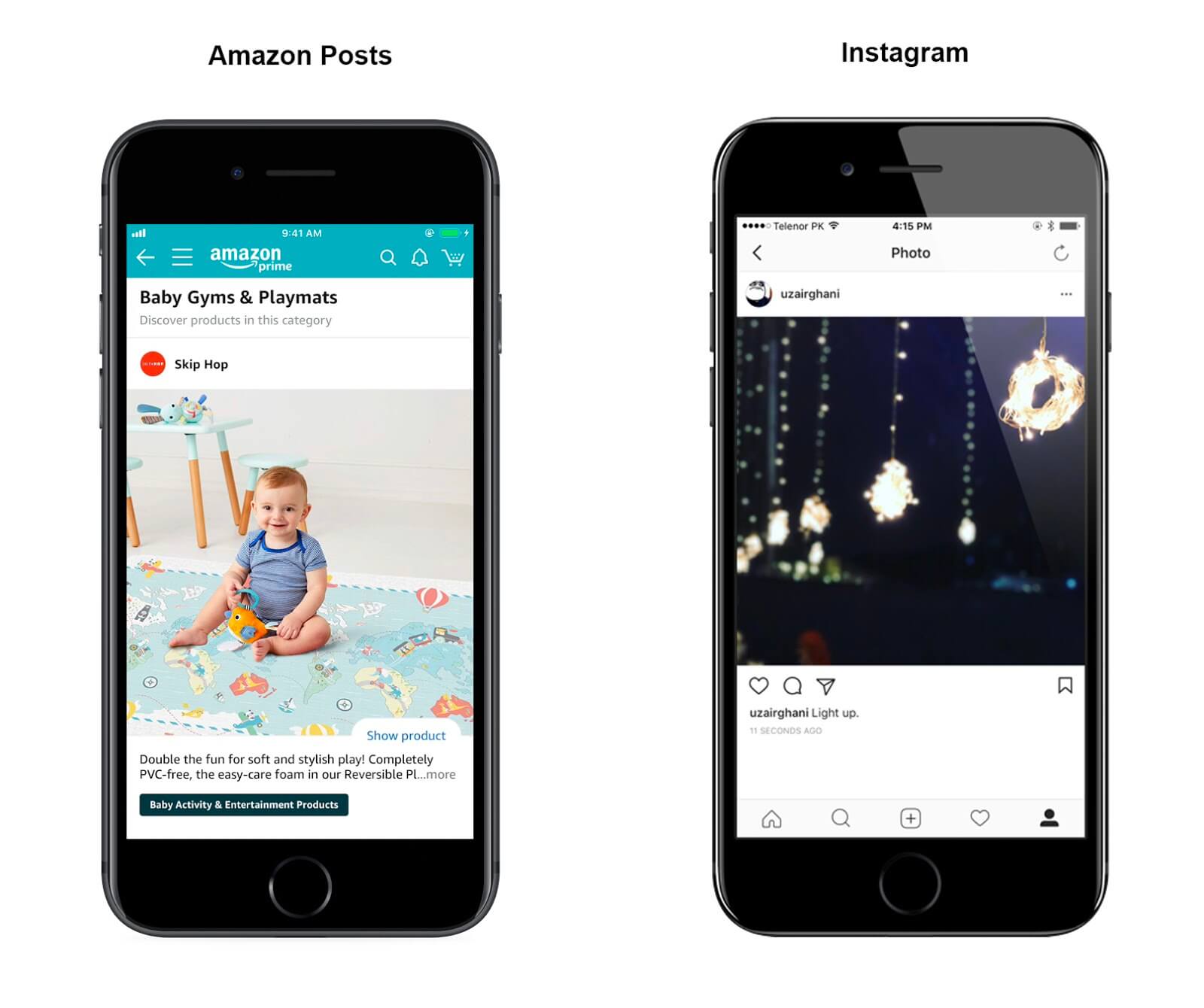 While we have no idea how much money Big Orange spent on this new tool, it’s likely that its development cost somewhere in the millions. Not every company on earth has the resources to put towards such an ambitious project, which is a signal that Amazon is still willing to try new things.

And usually, these new things pay off. In 2018 alone, Amazon increased its net income by nearly $7 billion, more than doubling its previous total. And as we’ve often said before, Amazon is hardly done growing.

So while Amazon may make the occasional unsuccessful move — such as with women’s fashion labels — they’re also the company that turned books digital (Kindle), introduced talking hockey pucks to our homes (Echo), and made cable-cutting easier than ever (Fire TV Stick).

Even if Posts doesn’t work out for Amazon, I’d still feel safe betting on their future prospects.

3. Not a Game-Changer: Does the World Need (or Even Want) Yet Another Social Media Platform?

So does the world really have space for another social media content-sharing platform? Of the 7.6 billion people in the world, a little less than half use social media, and already internet users have an average of 7 accounts.

Are the 3.4 billion social media users worldwide ready to increase that number?

As of this writing, only third-party sellers who meet certain requirements can create content for Posts. The barriers to Amazon Posts entry are as follows:

Therefore, only sellers who legitimately seek to build brands within Amazon — even those the size of Nike — can do so without fear of running across hijackers, piggy-backers, and the other black hat sellers who make selling on Amazon difficult.

1. Not a Game-Changer: Amazon is Focusing on the Wrong Functionality

So why would Amazon focus on improving the functionality of its app versus mobile browsing where it suffers and the opportunities are more apparent? Such a move points (potentially) towards the reactive nature of the move versus trying to improve and grow as a company.

But, Amazon is open to testing ideas, so time will tell if this one pans out!