It was the fall of 2015, I was working with the Jungle Scout team to put the finishing touches on the release of the Web App. I was itching with excitement at the potential that the Web App had. I had been selling on Amazon for a few years by that point, and was accustomed to spending hours on product research to come up with new ideas. But now within a few clicks, I could pull from a database of millions of Amazon products to find a product that fit any criteria that I wanted. It was magical.

It all started with Sharing Success

I was so excited to share the magic with others. The only problem was that the process of selling on Amazon was shrouded in mystery, and there was a knowledge gap between how Jungle Scout worked and how it could empower Amazon sellers. There are many people who share the high level strategies of selling, but all-important details were lacking in what the experts teach in theory, and how the process actually worked.

The Collaborative Launch Was Born…

I thought it would be a really fun challenge to do a case study of selling on Amazon: could I replicate the success I had had as an Amazon seller, but while sharing everything publicly?? It was, as they say, putting my money where my mouth is. I decided that I would cover everything, from coming up with product ideas, sourcing, importing, creating a listing, running ads, split testing, inventory management, and more. I would cover every step in detail, all victories and failures along the way.

Oh, and one more thing: all proceeds would be donated to charity. We ran a poll with all of you and you guys chose Doctors Without Borders. Fantastic!

Fast forward to late July, and we have some big updates. Since we started this case study (you can see some of the webinar recaps here), we have sold more than $56,000 in revenue of bamboo marshmallow sticks, called Jungle Stix!

Here is a screenshot of Seller Central’s dashboard that includes the sales figures:

But more importantly than the sales is the bottom line, and what we have raised to donate to Doctors Without Borders. May I have the drumroll please…

For the first six months of Jungle Scout sales, we have raised $18,036 that will be donated to Doctors Without Borders!!

This is a fun picture that I took with the Jungle Scout team: 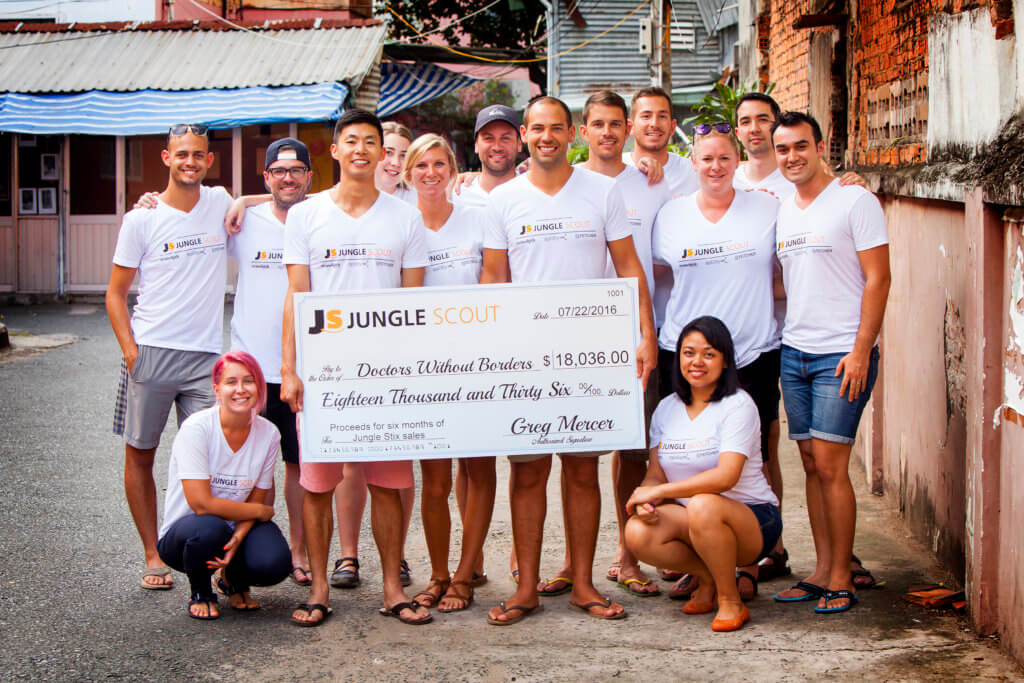 We will continue selling Jungle Stix, and raising more money. But I also thought that it would be helpful to reflect on the experience and pull out a few lessons that I learned along the way. So here are three lessons learned about selling on Amazon that may help you along the way.

Lesson #1: There is always room for improvement

In general, I am an optimistic fella. But when you are an Amazon seller, there is always room for improvement. That is because the market conditions are always changing, competition is always present, and customer needs change as well as Amazon’s policies. That means it is imperative that you are always testing and optimizing your Amazon listing. 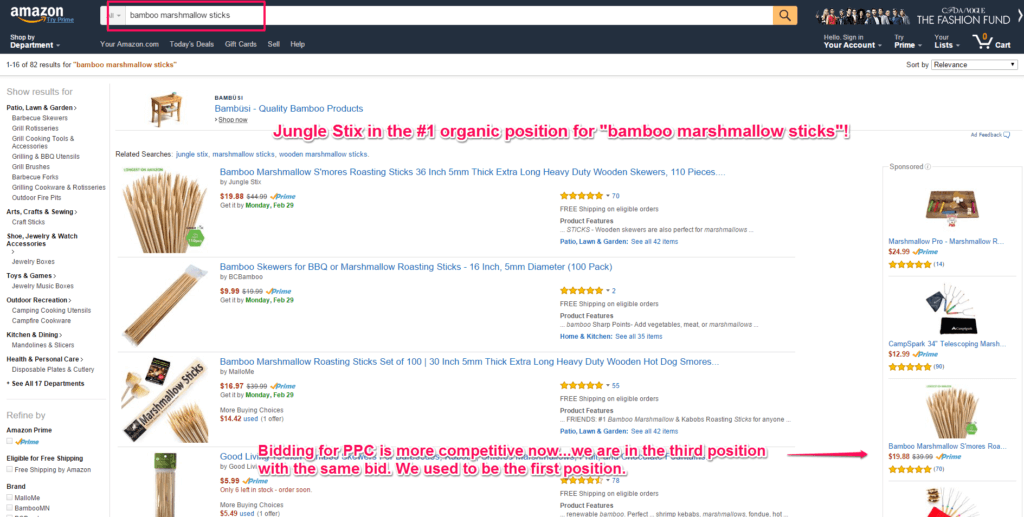 and the search results for “marshmallow sticks”: 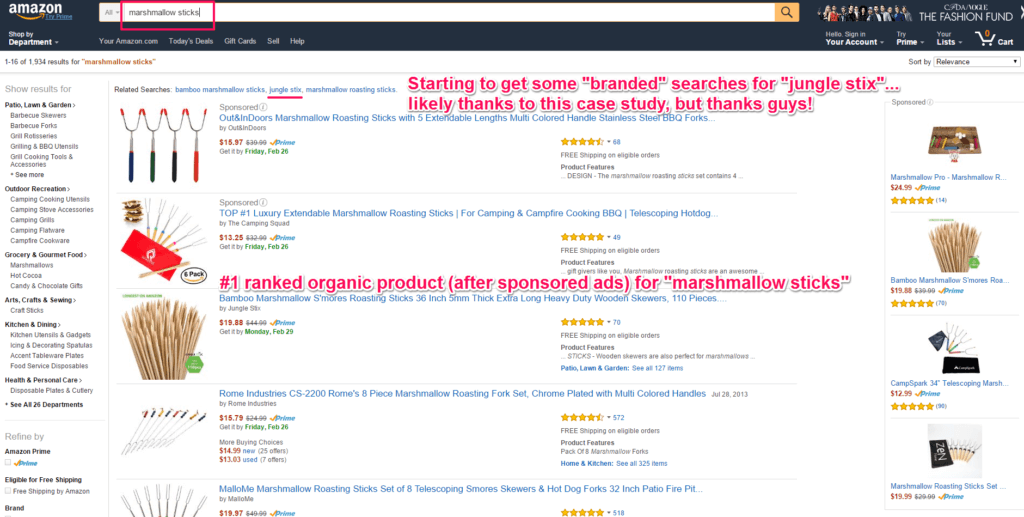 I wrote about how I achieved the top ranking in this post.

However, it would be a huge mistake to rest on my laurels and be happy with just being the top ranking product for any search queries relevant to our product. I initially put the listing together based on my intuition of what would work, but I am ultimately not the end customer. I needed to optimize and improve my listing based on hard data. I needed to run split tests on my listing.

Admittedly, I was a bit late to starting split tests. I was busy, and I never got around to it. Big mistake. I basically ended up leaving a good amount of money on the table by not optimizing my listing once Jungle Stix had started generating some sales.

One interesting test that I ran was a pricing test. If you look at the first page results for “marshmallow sticks” now, all of the products will be less than $20. However, when I first launched Jungle Stix, I priced at $27. That price may have been too steep, so I dropped it to $19.88 (don’t ask me why, I just wanted something less than $20). That decision though was just based on intuition. So I decided to be more data-driven with my pricing decision, and run a pricing test.

My hypothesis was that I could position the product as a premium product with a higher price point, and squeeze out a higher profit. I ran the test for a few weeks, alternating between the control version (priced at $19.88) and the variant (priced at $21.88). The test results were interesting, to say the least. I did not experience any noticeable difference in sessions (meaning people clicked through on the listing regardless of price). However, I there was a drop in sales every day, and also conversion rate. Fewer people wanted to purchase at a higher price. Here’s the kicker though: my profits increased by 24%

This is what the results for the Price Test came out as: 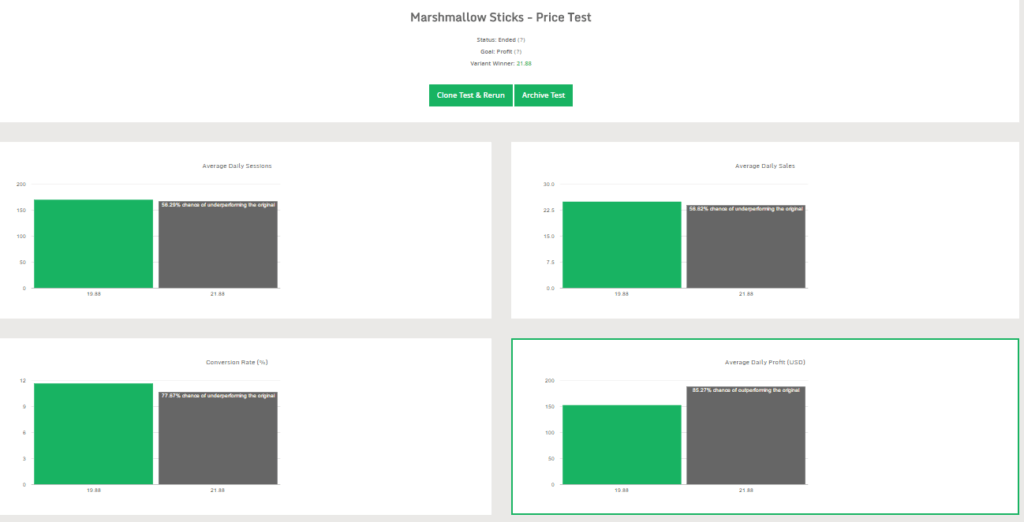 How hard was it to start and run split tests on Amazon? Dead simple. I used Splitly to automate the whole process, so after I linked up my Seller Account and selected my Goal (I opted for Profits as my main goal), I started running tests. And by “running”, I mean that I let Splitly do its thing and alternate variants every day for two weeks until a clear winner emerged.

Here’s a screenshot of the test results for most of the Key Performance Indicators. 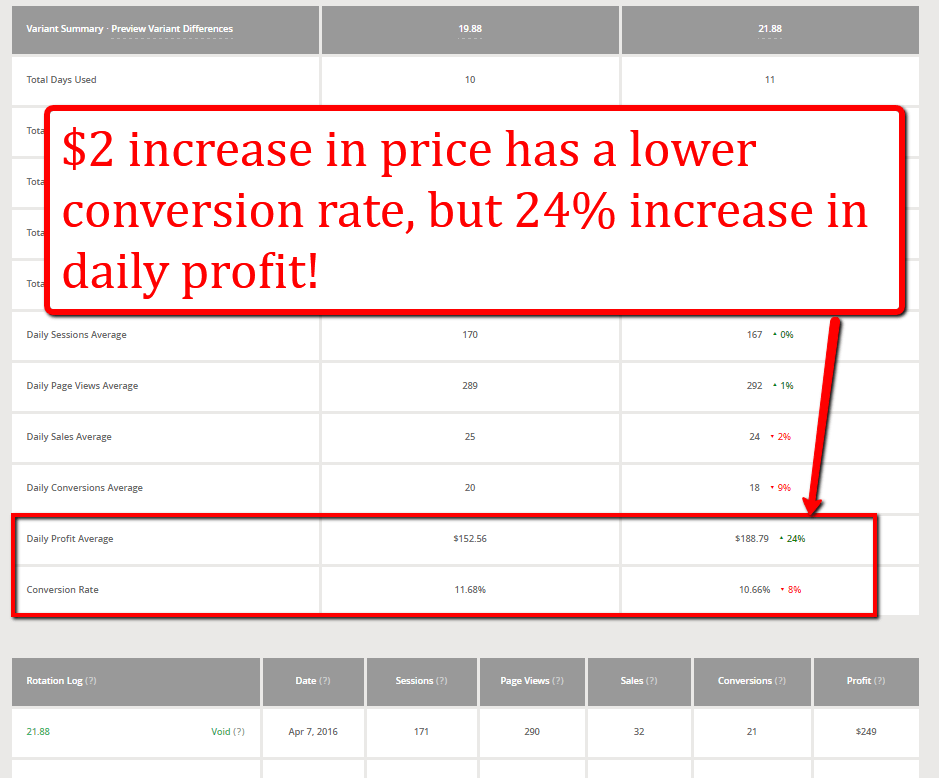 I highly recommend running some split tests on your product to squeeze out incremental improvements and sales. There are always tests to run, and always improvements to make. The trick is that you don’t know what they are until you actually test them. You can run them manually, by alternating between two variants every day at 12M PST (when Amazon refreshes its sales data every day), or just automate the process with Splitly. It is the easiest way to generate growth in a cost-effective and speedy manner.

Lesson #2: Amazon has room to grow

Amazon is not a zero sum game. By this, I mean that the customer demand is not a fixed number, but can always increase. So if I sell a product, it does not necessarily mean that a competitor will lose a sale. Instead, they can just get an incremental sale from somewhere else.

Just for fun, let’s take a look at the data that we used in October 2015 to decide to sell marshmallow sticks.

This is the Jungle Scout extension data from that time:

And we tracked the actual data using the Web App’s Product Tracker to verify the demand. This is what it looked like:

In summary, it looked like there would be enough demand, with consistent sales. And after tracking some actual data for a while in the Product tracker, there didn’t appear to be any artificially inflated sales rankings due to promotions or giveaways. I was seeing Best Seller Rankings that were hovering around 400 to 1500, with some sellers generating 20 to 30 sales per a day. That was good enough for the green light, in my mind!

I also saw that there was “depth” in the market: sellers who weren’t in the top 5 organic results for “marshmallow sticks” were moving a healthy amount of product every month.

The last aspect that I thought I could do to differentiate a product was offer greater value. While other competitors were selling marshmallow sticks in bundles of 100, I thought that I could offer marginally more product at the same price, and promote this in the listing. The incremental cost of goods sold would not be that much, but I’d be able to convert at a higher rate as a result of offering greater value.

Well, it turns out that there is a lot more demand for marshmallow sticks than I initially anticipated. Here’s a look at the Jungle Scout sales estimates for “marshmallow sticks” today, July 19th: 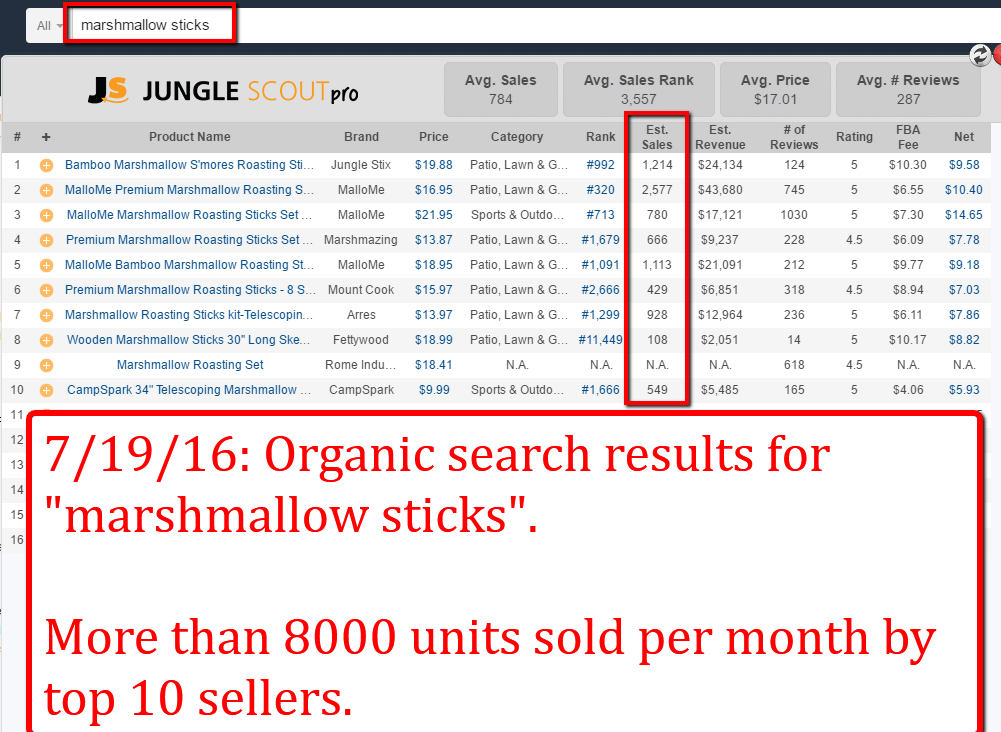 There are a lot more monthly sales than I initially anticipated based on the data I looked at in October! I knew that the summer and fall would be peak months because it’s a great time for campfires. However, even referencing Google Trends I would not have been able to know that there would be such a spike in sales. As of today, it looks like there are more than 8000 sales for “marshmallow sticks”. 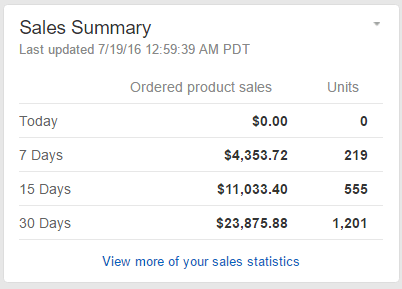 I think that we will sell even more in the late summer months as we continue to optimize our listing, and demand stays strong as families spend time camping and roasting marshmallows. The key takeaway is that Jungle Stix are successful because there is existing demand, and we just created a product to capture a sliver of the existing demand.

Lesson #3: Amazon is a meritocracy

Admittedly, the circumstances of me selling Jungle Stix are slightly skewed because it is a public case study. Presumably, people could have gone to Amazon and purchased Jungle Stix to support the cause, (if in fact they needed marshmallow sticks). However, I don’t think that this is the case.

We may have experienced more people visiting our page to see what’s going on there, but I don’t think that they went through and purchased. Therefore, we actually probably have a lower conversion rate than if we had done this privately.

This is an important point because we were not given much of an advantage just because it is a public case study.

I believe that the success of Jungle Stix is a result of 3 things:

Any one of you can do these as well as I have, and probably better.

The beauty of this is how much of this is nearly automated. Running some occasional promotions on Review Kick, and sending a follow up email campaign on every sale where I ask for a product review, I have been generating about 25 new reviews every month. This is what my review analytics look like in Review Kick: 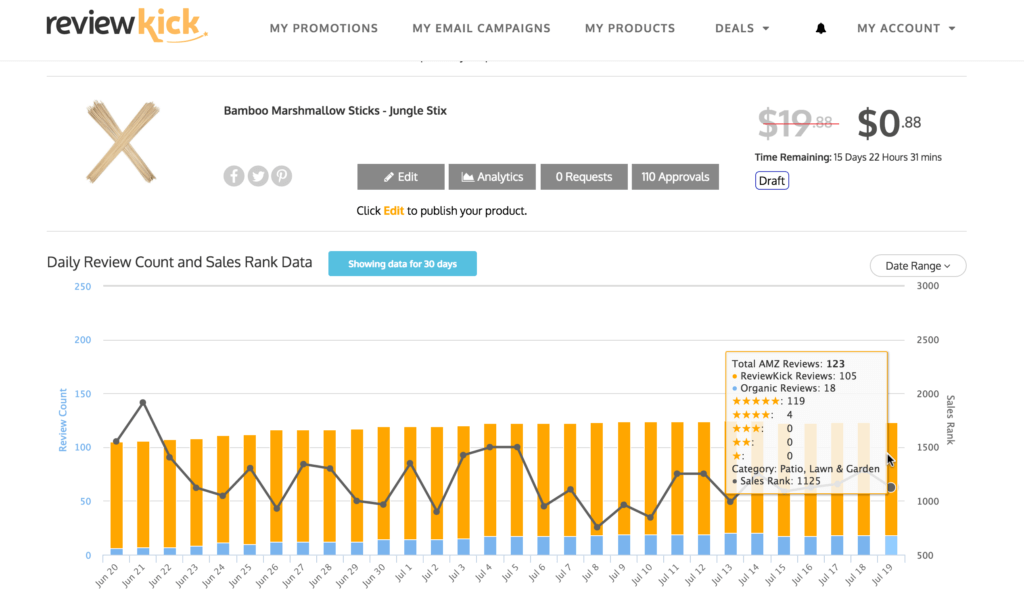 Moving up the Best Seller Ranks and making money on Amazon is not related to who you know. It is actually very formulaic, and replicable.

My goal in running this case study was to make it as instructive as possible. I think that by sharing as much information as possible, and behind-the-scenes figures, we can all learn and improve. I am really pumped that we were able to run this case study together (we will continue selling and writing about this as well). And it is fantastic that we were able to raise money for Doctors Without Borders!

Now it’s your turn: what questions do you have that I haven’t covered, in any of the previous posts or this post? What are your greatest challenges that you face as an Amazon seller or a soon-to-be seller? I’d love to help out, and will address your questions in the comments section, so share your comments below and let’s get everyone succeeding on Amazon!

Some additional posts from the case study that are helpful: