In this article, I tackle the subject of Amazon Lightning Deals, and cover the following sub-topics:

Are you new to selling on Amazon? Be sure to check out our FREE video:

How to Sell on Amazon for Beginners

What are Amazon Lightning Deals?

Straight from the horse’s mouth, this is a lightning deal:

A Lightning Deal is a promotion offered in a limited quantity for a short period of time.

Since Lightning Deals are time-sensitive, it’s important to complete your order as soon as possible. You can sign up to watch a Lightning Deal up to 24 hours before it begins.

When a Lightning Deal is available, here’s what you’ll see:

Note: On Prime Day, all deals are exclusive to Prime Members.

Learn more about how to Join a Lightning Deals Waitlist.

How do you create an Amazon Lightning Deal?

To create a Lightning Deal on Amazon, you must do the following:

To be eligible for these deals, you must have a Professional Seller account, receive at least five Seller Feedback Ratings per month, and have a minimum 3.5-stars rating overall.

Your product must also meet certain criteria. It must:

2 – Log onto Amazon seller central and go to the Deals menu.

Once you’ve determined that your Amazon seller account and product are eligible for an Amazon Lightning Deal, go to Amazon Seller Central and log in.

Once there, go to the ‘Promotions’ tab and click ‘Deals’.

When the screen loads, you’ll see all of your previous promotions, as well as a button that reads ‘Create a new deal’.

4 – Choose an eligible product and enter the information for its deal.

In the example below, I selected Jungle Stix as the product for the promotion, and Lightning Deal as the type. 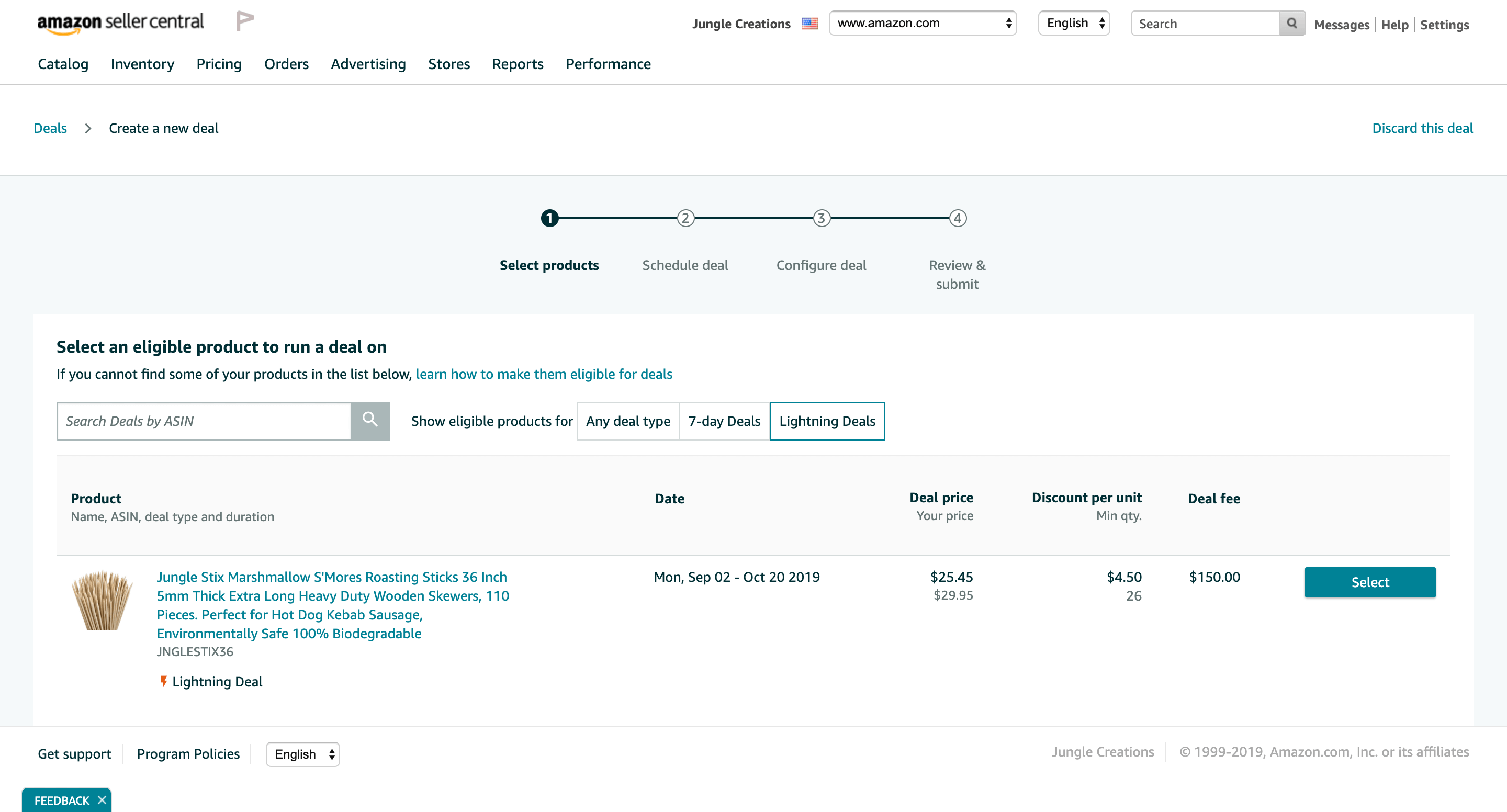 After you’ve entered in all of the relevant information for your Amazon Lightning Deal, you’ll need to pick a date range for the promotion. Amazon doesn’t allow you to pick the actual day and time that your Lightning Deal will appear. 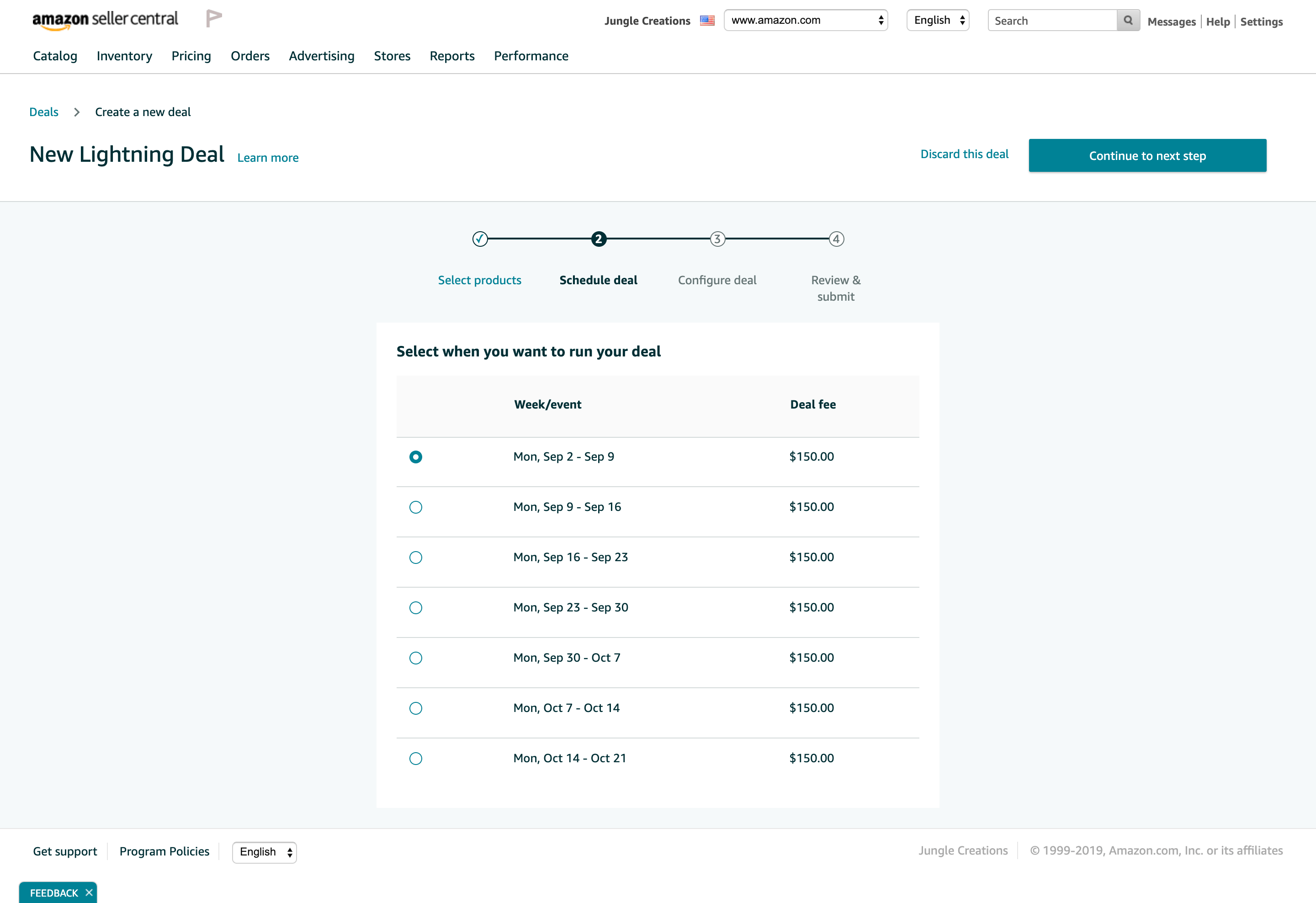 Once you have the time period set, you’ll need to enter the deal’s pricing and number of units available for the deal. 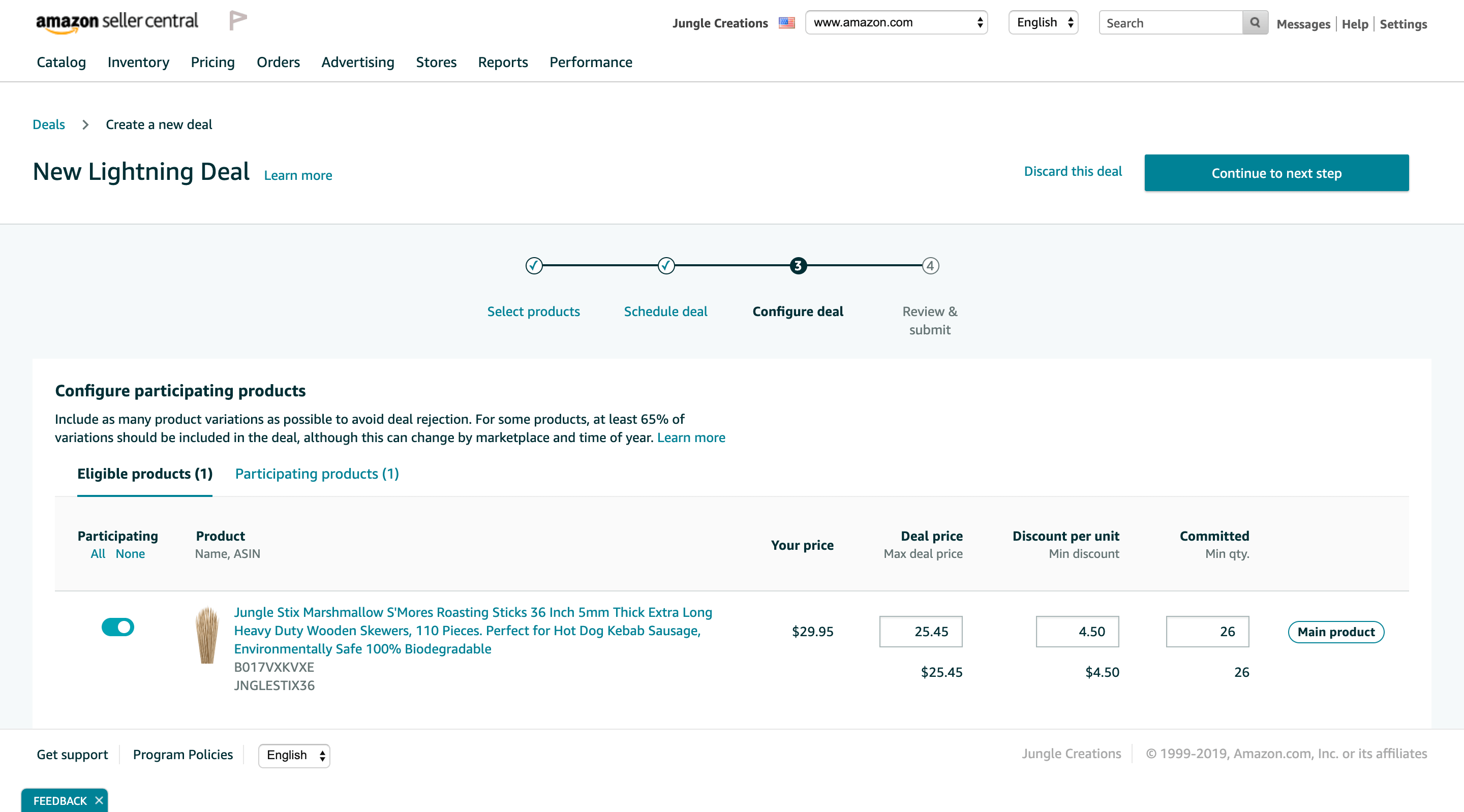 Once you’ve decided that all of your information is correct, submit your Lightning Deal for approval. Typically, the approval process is instantaneous. 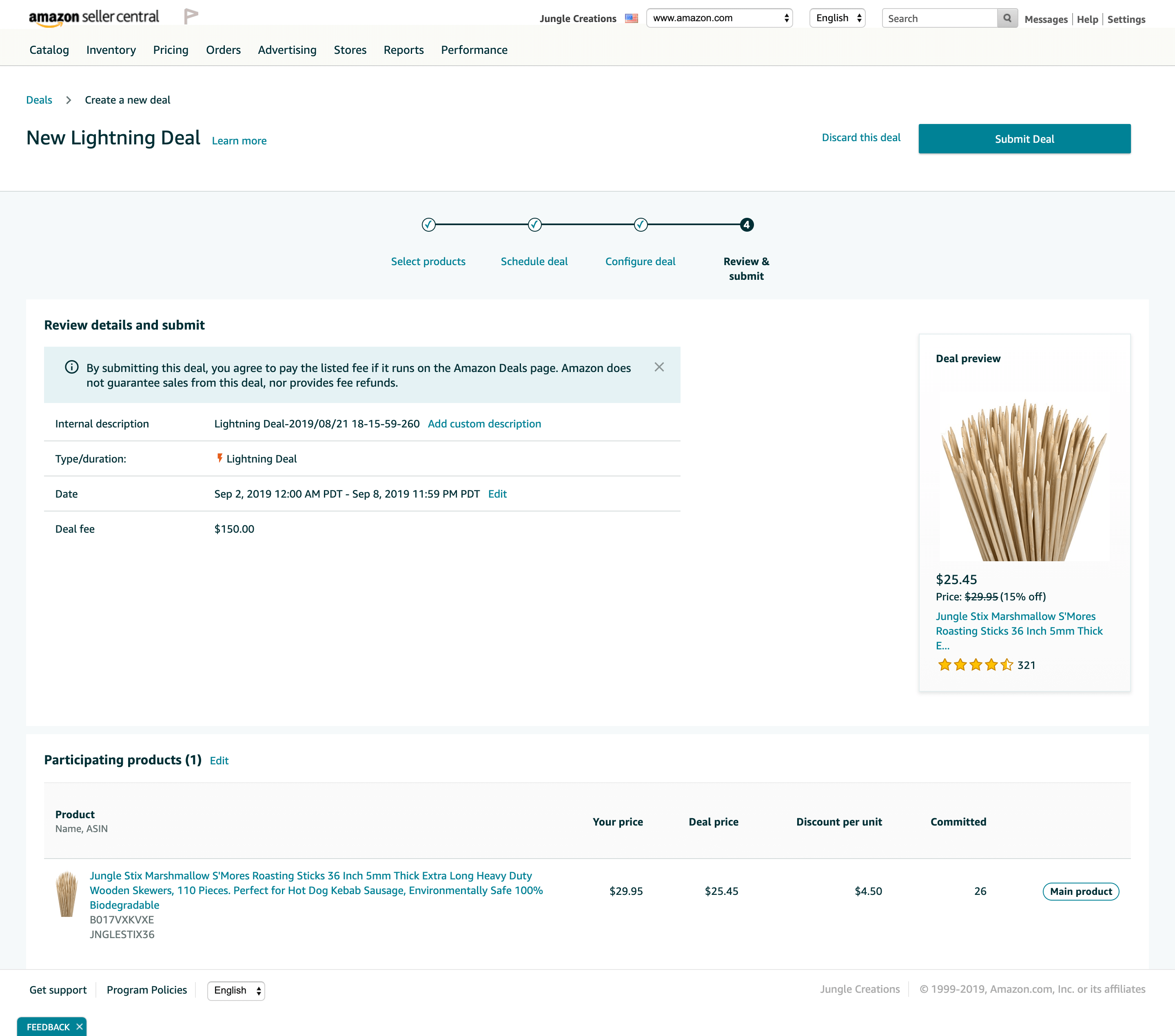 Amazon usually notifies its sellers the week before your actual Lightning Deal. And though there is no way to influence the day and time your Lightning Deal appears, if you’re lucky, it will appear during a weekday morning when shoppers are busy buying.

But if you’re unlucky, your Lightning Deal could appear on Amazon at two o’clock in the morning. On a Sunday.

How many Amazon Lightning Deals are there every day?

Once upon a time, Amazon Lightning Deals were awarded very rarely. So rarely did they appear that we suspect (since we don’t have data from that period) that back in 2016 there were less than 10% of the Lightning Deals that appear now.

Recently, we put together some data to see just how many Lightning Deals there are on Amazon every day. This is what we learned: 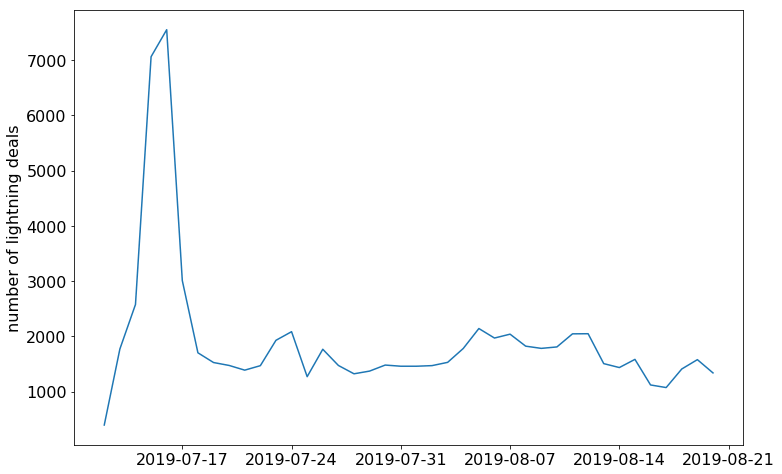 As you can see from the chart above, on average, Amazon hosts close to 1,500 to 2,000 Lightning Deals per day. The massive spikes around July 17th were the Lightning Deals for Prime Day.

So, in a given month (excluding July), Amazon can host as many as 45,000+ Lightning Deals. That’s quite a bit of competition!

How much do Amazon Lightning Deals affect your sales?

The question I wanted answered when I first started writing this was: how much do Lightning Deals help improve a seller’s sales?

We collected data on the average Lightning Deal’s effect on sales before, during, and after the Lightning Deal debuts on Amazon. These were the results: 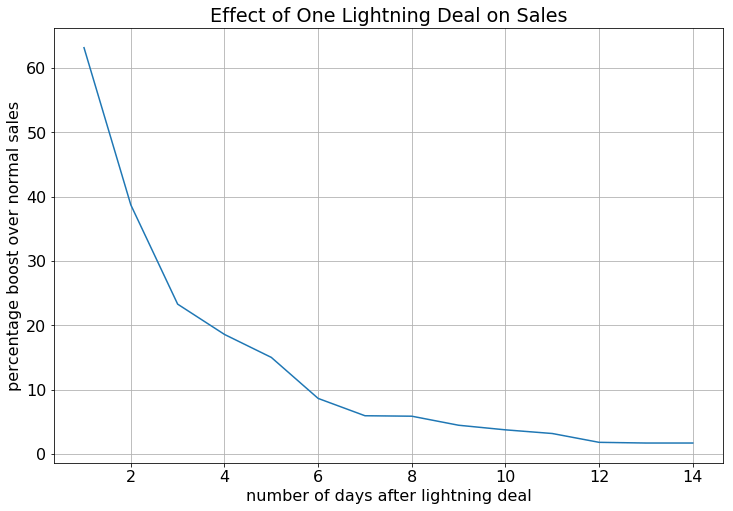 On average, a product sees an approximate 65% boost in sales the day of the Lightning Deal.

The day after the sale, the boost is still there but it drops to close to 39%. On day three, it’s down to 22%, and 19% on day four. By day six the boost is below 10%, continuing its downward trend back to its original sales numbers over the next eight days.

Now that we know Amazon Lightning Deals DO improve sales, one question–a million dollar question–remains. Are they worth it?

Let’s do some quick math to determine if Amazon Lightning Deals are, in fact, worthwhile.

Taking all of this into account, once a unit of Jungle Stix sells during a Lightning Deal, the product earns a gross profit of $12.13. Here’s how that breaks down:

In order to cover the $150 fee for the Lightning Deal, we need to sell 12 more units than what we normally sell over the course of 7 days. So, if our data is correct and we see a bump of 200%, that means the $150 will be covered by the sales made during the actual Lightning Deal.

The boosted sales in the days following the deal will be pure profit. Here’s what the crunched numbers look like:

With an extra $500+ in potential profit up for grabs, I’d say that Lightning Deals are probably worth doing. But I strongly recommend doing your own math first, to make sure any deal you’re planning to run will be profitable as well.

What if you can’t profit from an Amazon Lightning Deal?

Of course, Jungle Stix are in a unique position. The product earns an average of 30 sales per day already, for 900 sales per month, so an additional 60 sales are just icing on the cake.

The best way to decide if an Amazon Lightning Deal is a profitable option for your Amazon FBA business is to perform a break-even analysis on your product.

If you aren’t sure how to figure out your product’s gross profit, simply use this equation:

For example, if I sell a textbook for $25 on Amazon (discounted from its normal price) and my total Amazon fees are $9.05 and the landed cost of my product is $5.50, then my product earns $10.45 in gross unit per sale.

Back to the previous example, if I’m earning $10.45 per textbook after the discount and my Lightning Deal is $150, I need to sell at least 15 textbooks in order to cover that fee.

3 – Determine if it’s possible to reach a break-even number with your average daily sales.

Looking at our data for the average percentage bump experienced with Lightning Deals, you need to use that to determine if it’s even possible to sell enough units to warrant the cost of the Lightning Deal fees.

You can figure this by dividing your break-even unit number (the one you discovered after following step two) by the average percentage bump (which, in this case, is 200%).

If the result is lower than the average unit sales per day for that product, then the Lightning Deal is worth it. You will profit.

If the result is equal to the average unit sales per day for that product, you will break even.

And if the result is higher than the average unit sales per day for that product, you will lose money.

For example, to break-even with my textbook product, I determined I need to sell 15 units. So the equation (and answer) would look like this:

Here are a few more things to think about when it comes to performing a break-even analysis for a Lightning Deal:

What other reasons are there to use Amazon Lightning Deals?

Of course, an increase in sales is only one reason to schedule an Amazon Lightning Deal for your product. Other reasons that you might create a Lightning Deal include:

If you have a ton of inventory you need to unload, a Lightning Deal can help you do that. Even if you end up losing money in fees, removing your inventory this way is still better than liquidating it through Amazon’s liquidation program (which can pay as little as $0.05 per unit).

Of course, the problem with this option is that Amazon rarely approves slow-moving, liquidation-ready products for Lightning Deals. But there’s no harm in trying!

A loss leader is when a company discounts a product in order to attract customers and capture their information. Lightning Deals can also be used in this way.

However, the challenge with this method is that Amazon doesn’t allow its sellers access to customer information. Emails, addresses, buyer information; it’s all owned by Amazon.

It is possible to place something in your packaging though, to lead customers to alternate channel where you can get their contact info. I should mention, conversion rates are low with this, and ultimately it’s not as cost-effective as doing a similar promotion off-Amazon.

When a Lightning Deal is successful, sellers not only experience an increase in sales. They also see an improvement in their best seller ranking (BSR). And when the best seller ranking improves, the product’s visibility improves as well. We saw that in the percentage bump chart above.

It’s time I admit something to you. When I started writing this piece, I had a pretty negative stance regarding Lightning Deals.

In my experience, Lightning Deals almost never seemed to work. I’d sell an extra 10 units with a deal, but it wouldn’t be enough to cover the fees.

So, not only did this information change my mind about Lightning Deals, it’s also made me think I need to start running them as soon as possible!

What do you think about Amazon Lightning Deals? Let me know your thoughts in the comments below.

7 comments on “Amazon Lightning Deals: Are They Worth It?”