A powerhouse like Amazon commands shopper attention. Aptly monikered The Everything Store, Amazon offers products and services that include retail goods, delivery, advertising, digital services, electronics, and media. What once started as an online bookstore has transformed into the largest online retailer in the world — and it’s no wonder why entrepreneurs want in.

The multinational ecommerce company has snapped up some incredible accolades for growth, sales, and seller success. And if you’re an Amazon seller or want to become one, here are 15 Amazon statistics you should know:

1. Amazon owns the largest piece of the pie for ecommerce sales.

When it comes to online sales, Amazon is a mammoth. Amazon will account for nearly 40% of the U.S. ecommerce market this year. 31% of the market will be comprised of the next 14 biggest online stores (think Walmart, Apple, eBay), and the remaining 29.5% will go to other retailers. For comparison, that’s almost as many shoppers as the entire population of the U.S. eTail reports that 90 million of these active global customers are Amazon Prime members.

4. 66% of consumers start their product searches on Amazon.

6. Most Amazon sellers are “bootstrappers.”

A majority of small and medium-sized businesses (69%) spend less than $5,000 to start a business on Amazon, and 32% spend less than $1,000 — with most sellers using their own cash. Up-front investments can include the cost of products, Amazon storage and seller fees, and advertising budgets. 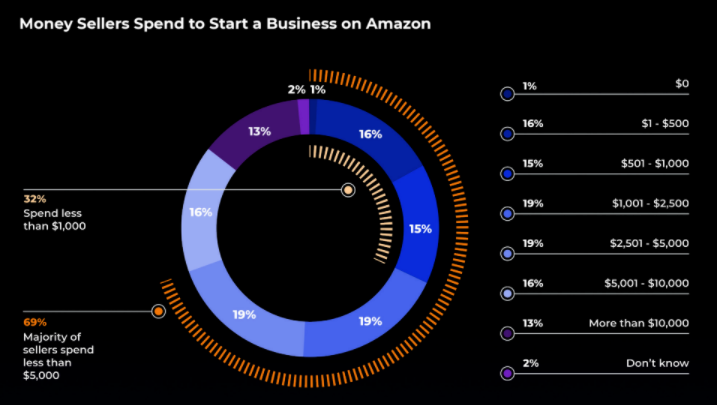 According to our research, 76% of Amazon sellers are profitable, and 63% are profitable within a year of launching their business. In 2021, 60,000 third-party sellers exceeded $1 million in sales, and approximately 350,000 sellers collected more than $100,000 in sales.

8. 22% of Amazon’s total revenue is attributed to third-party sellers.

These entrepreneurs are making a big impact on the Amazon business — in fact, 82% of SMB Amazon sellers are third-party sellers.

9. Third-party sellers in the U.S. sold over 7,000 products per minute on Amazon.

10. 89% of sellers use Amazon FBA (Fulfillment by Amazon) as their selling method.

Amazon FBA is the most popular fulfillment method for third-party sellers; 59% of sellers create their own product and brand with the private label model.

11. Home & Kitchen is the most popular Amazon product category among SMB sellers.

32% of SMB Amazon sellers sell in the Home & Kitchen category, due to ease of manufacturing, durability during delivery, and minimal category restrictions. The second most popular category for sellers is Beauty and Personal care at 23%, followed by Toys and Games at 20%.

25% of third-party sellers are looking to aggregators to acquire their business, a new end game for Amazon entrepreneurs. And for good reason: aggregators raised over $12 billion in 2021.

According to Statista, U.S. households with Amazon Prime are expected to grow 15% in 2022 — up from 66.4 million households in 2019. And that tracks: 80% of U.S. consumers expect free shipping on orders above a certain dollar amount.

Amazon’s employment has impressive global reach — and this doesn’t even account for Amazon’s seasonal or temporary workers.

Advertising on Amazon clocked in at $31.2 billion in 2021, with a growth rate of 32%. Advertising makes twice the revenue of physical stores and more than Amazon’s subscription services, like Prime. 79% of Amazon SMB sellers advertise their products on or off Amazon.

Amazon continues to impress with staggering ecommerce stats. As the mainstay of ecommerce, Amazon is securing its spot at the top, while providing third-party sellers an opportunity to join in on the victory.

Want to be a part of these stats? See how Jungle Scout can help you win on Amazon and ecommerce.

Melissa is a writer for Jungle Scout whose experience spans the tech and hospitality industries. Her passions include classical ballet and advocating for the Oxford comma.