New Amazon sellers are earning between $26,000-$810,000 per year in profits. What does it take to start selling on Amazon, and what can new sellers do to ensure they’re profitable in 2020? Jungle Scout’s latest report has the data.

The majority of Amazon sellers (80%) say they sell on Amazon for the freedom the income provides. They’re looking for a new job or to “be their own boss.” Many are looking for extra money to support their kids or to pay off debt or even to travel the world.

Whatever the reason for selling on Amazon, it’s the primary income stream for many.

So just how much can you expect to make selling on Amazon in 2020?

The team at Jungle Scout — an all-in-one platform for selling on Amazon — recently surveyed* thousands of Amazon sellers so you can learn all you need to know about getting started selling on Amazon from those who are doing it.

Now, on to the data!

1. How much do Amazon sellers make?

Though there are a number of different methods for selling on Amazon, most common is Amazon’s Fulfillment by Amazon (FBA) program.

Like any other business, selling on Amazon will involve some expenses and fees on the seller’s part, but what makes Amazon FBA so appealing is that it simplifies that for sellers.

In short, you choose a product, get it to Amazon’s warehouses, set up your Amazon listing, and Amazon takes care of the rest. And you start seeing sales and profits.

What are the average monthly sales for Amazon sellers? 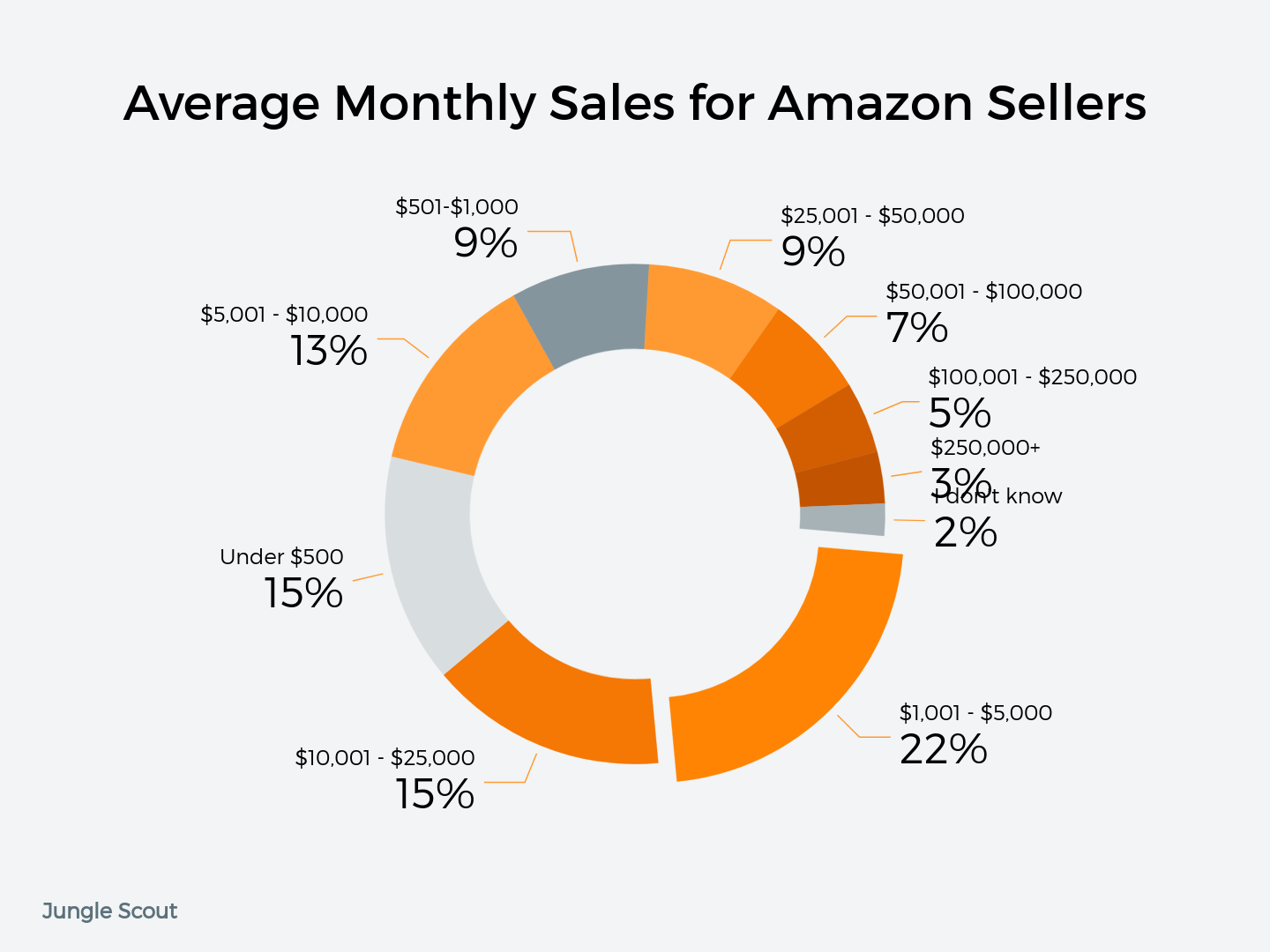 Further, since selling on Amazon has only become a viable way of building an e-commerce business in the past few years, most Amazon sellers are relatively new to the game.

But that hasn’t limited their sales.

While sales are often a strong measure of a healthy Amazon business, they don’t paint a complete picture of what money an Amazon seller takes home. So let’s turn to profits.

How much do Amazon sellers profit?

The higher the profit margin, the better, but small companies often struggle to achieve profitability at all in their first few years.

While profits change based on factors including sales volume and business expenses throughout the year, sellers weighed in on their total lifetime profits since they started their Amazon businesses.

How much money have Amazon sellers made over time?

A large number of Amazon sellers (43.2%) have seen lifetime profits of more than $25,000 — not bad for what many start as a “side hustle” — and 6% are millionaires from their Amazon businesses alone. 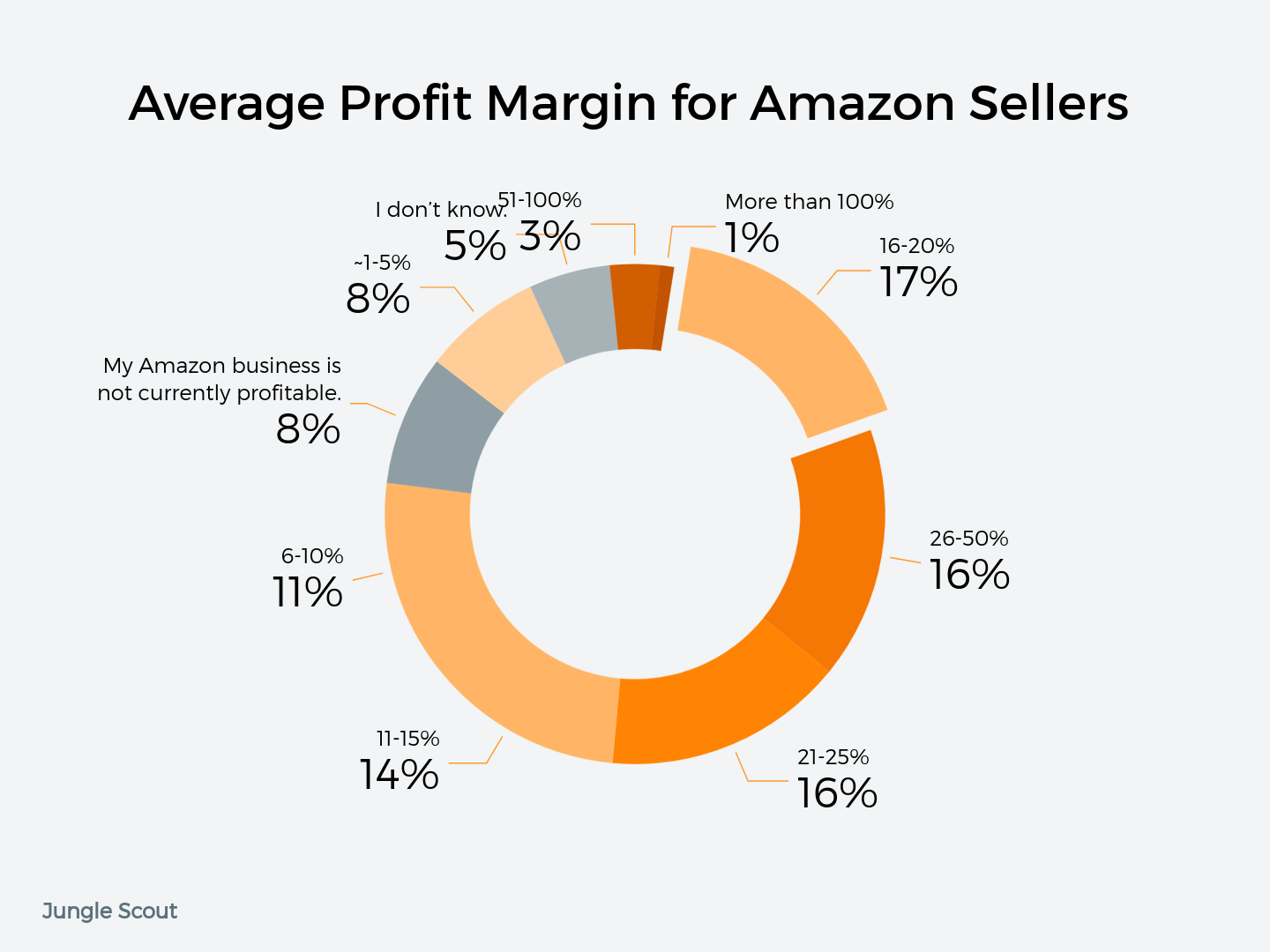 6% of Amazon seller are millionaires from their Amazon businesses alone

And for many Amazon sellers, those profits turn quickly.

2. How long does it take to become profitable on Amazon?

Across all respondents, the majority (67%) said they were profitable within the first year selling.

Even newer Amazon sellers (1-2 years of experience) still pulled in some strong profits in 2018 and 2019, and the majority (63%) were profitable within their first year:

So, how do you get started selling on Amazon? We asked sellers how much money and time they invested to get their businesses up and running.

How much money do you need to start selling on Amazon?

One of the biggest hurdles for people starting to sell on Amazon is the idea that it will cost them too much money. As with many things, what you put in impacts what you get out.

But that doesn’t have to mean cash — it can mean time, the necessary data to inform your decisions, or simply the will to succeed.

In fact, nearly one third (32%) of the most successful Amazon sellers spent no more than $500 — if any — to start the businesses they are still operating more than five years later.

What is that money spent on? Typically, initial costs include sourcing your product (including samples), Amazon fees, and promotions. (Read more about how much it costs to sell on Amazon here.)

Interestingly, you don’t need to spend a lot of money to be successful selling on Amazon, and often starting small correlates to greater success.

Sellers who spent less than $500 starting their Amazon businesses:

How much time do you need to start selling on Amazon?

Overall, Amazon sellers don’t need to spend a lot of time on their Amazon businesses. Most (57%) spend fewer than 20 hours per week doing so, and 13% spend just over 30 minutes each day.

In fact, you’re likely to give more time to get your business off the ground in its early stages; after they find products to sell and create their niche, many sellers simply maintain their businesses and let the income roll in.

By all known indicators, yes, selling on Amazon will be profitable in 2020.

Amazon is an industry unto itself, and it’s irrevocably tied into so many other industries that the opportunity for sellers to find a profitable niche to sell in is massive.

While some new sellers (12%) are not yet profitable, most are already taking big Amazon money home — or using it to invest further in their businesses:

What does that amount to in dollars? Let’s just say it’s enough to be considered much more than “side hustle money.”

How new sellers could start making $26K a year on Amazon:

And for the one-third of new sellers with profit margins of 21% and higher, they could be taking home monthly profits from $2,500/month to five figures and beyond.

New Amazon sellers are earning an average profit of nearly $26K per year.

A handful of new sellers are fortunate enough to be raking in incredibly high sales — upwards of $250,000 per month — $3 million per year. While these “super sellers” are outliers from the average seller, they’re certainly aspirational. How much are they profiting from selling on Amazon?

Considering the weighted average of the profit margin range among this particular group, 27%, these new super sellers are averaging $67,500 per month or $810,000 in annual profits.

Even more extraordinary, nearly 40% of these super sellers cited profit margins of 26% and above; 8% with profit margins above 100%. These folks are indeed Amazon millionaires.

*Weighted average calculated based on reported sales by midpoint of range, and capped at the high-end range ($250K) to prevent arbitrary projection.

4. Tips from successful Amazon sellers for a profitable 2020

Countless have tried their hands at selling on Amazon. So what can you learn from those who’ve had distinct, measured success? Some of their top tips:

Put in the effort — it will pay off.

Find the right resources and tools.

If you’re ready to start selling on Amazon, consider signing up for Jungle Scout’s Freedom Builder Bootcamp! Join Jungle Scout Founder and CEO Greg Mercer on a limited bootcamp course designed to get you up and running as a seller on Amazon.

For more tips and resources, check these out:

Between November 14 and December 10, 2019, Jungle Scout surveyed 2,063 Amazon sellers about their experiences. This article references responses from 1,046 experienced Amazon sellers who have more than a year of selling experience and at least one live product listing.

Respondents represent 93 countries, all 14 Amazon marketplaces, and all relevant Amazon product categories. They are ages from 18 to 80+, as well as all genders and levels of education.

To see the full survey results, including breakdowns by demographics, FBA vs. FBM, product category, and other critical variables, check out and download “The State of the Amazon Seller” report.

24 comments on “How Much Money Do Amazon Sellers Make?”