Who shops more, men or women?

Let’s take a deep dive into how men and women spend and shop differently in 2021, how differences in income and employment may influence this trend, and how behaviors could change in the future.

Despite long-held notions to the contrary, men and women tend to have similar overall shopping behaviors. They tend to prefer the same retailers, expect fast delivery for their online orders, and want to buy products with plenty of great reviews.

In 2021, Men are more discerning shoppers, showing greater concern for a product’s features, wider use of money-saving digital tools, and greater preference for flexible payment options. 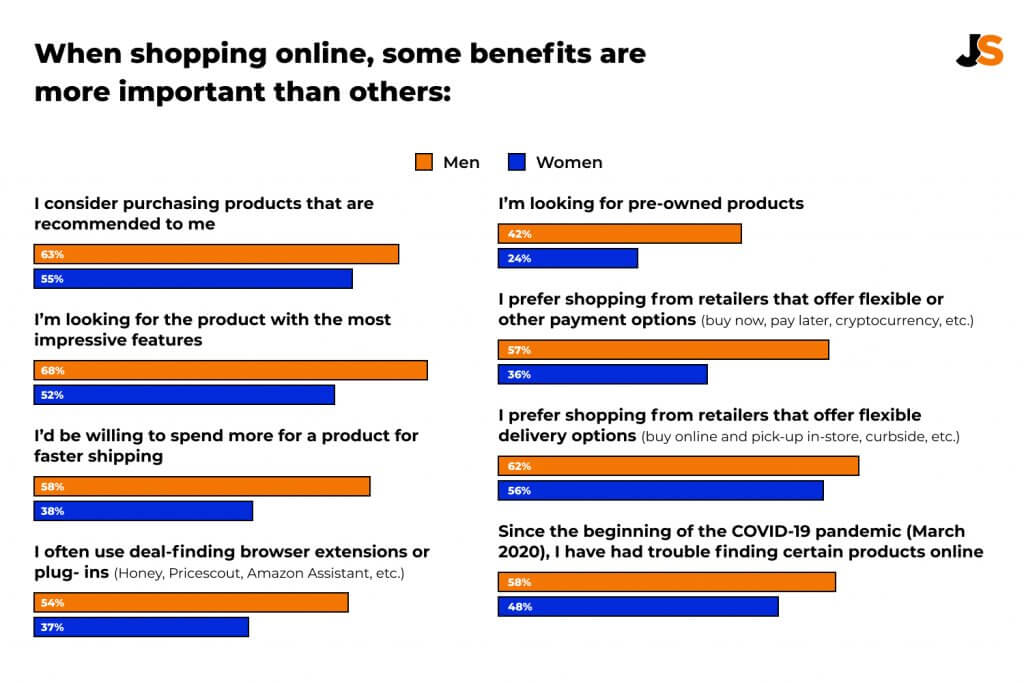 Our insights also show that, in 2021, men are slightly more willing to spend money than women are.

In the past year, financial uncertainty and job loss led to increased frugality among men and women alike. Today, using tech-savvy saving methods, like deal-hunting web browser extensions and flexible payment options, are popular with both men and women, and two-thirds (67%) of both groups say they’re looking for products with the lowest price when shopping online.

However, while most consumers have decreased or maintained their overall spending since 2020, those spending more money in 2021 tend to be men.

Women are spending less than men in 2021

Roughly three-quarters of men and women in the U.S. said their overall spending dropped or stayed the same in Q1. At least 61% of both groups said their spending online, on Amazon, and in-store at Walmart had also decreased or remained level over the same time period.

Men outnumber women as a proportion of consumers who reported higher spending in these areas. 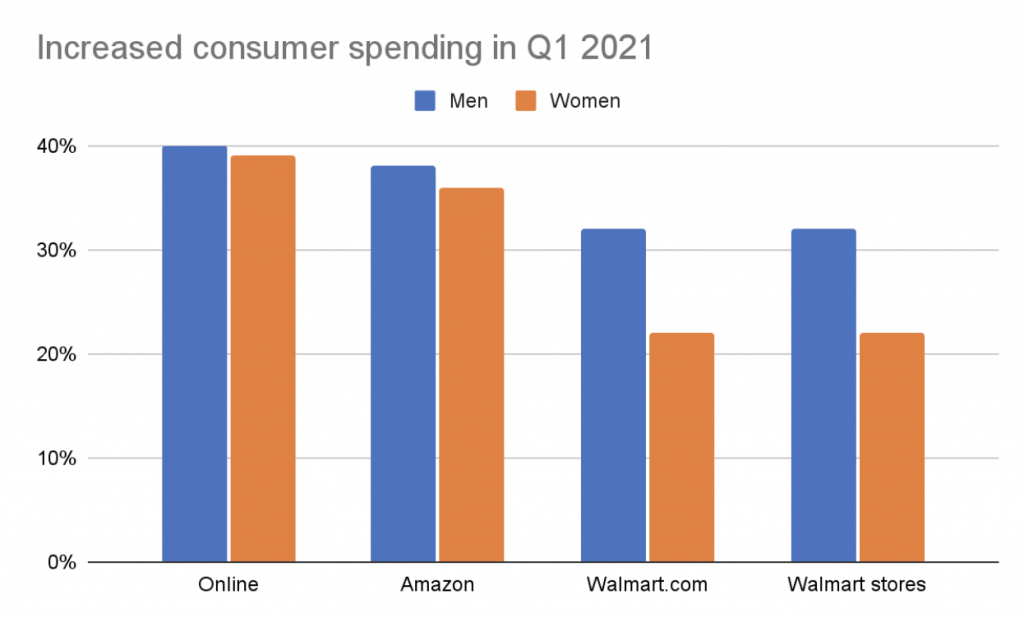 And while the majority of consumers also planned to decrease or maintain their spending in Q2, those who expected their spending to increase were more often men. In addition to spending more money as a group, men tend to shop more frequently than women online, on Amazon, and at Walmart.com, on a daily and weekly basis.

For the most part, men’s and women’s spending held stable across different product categories from Q4 2020 to Q1 2021. 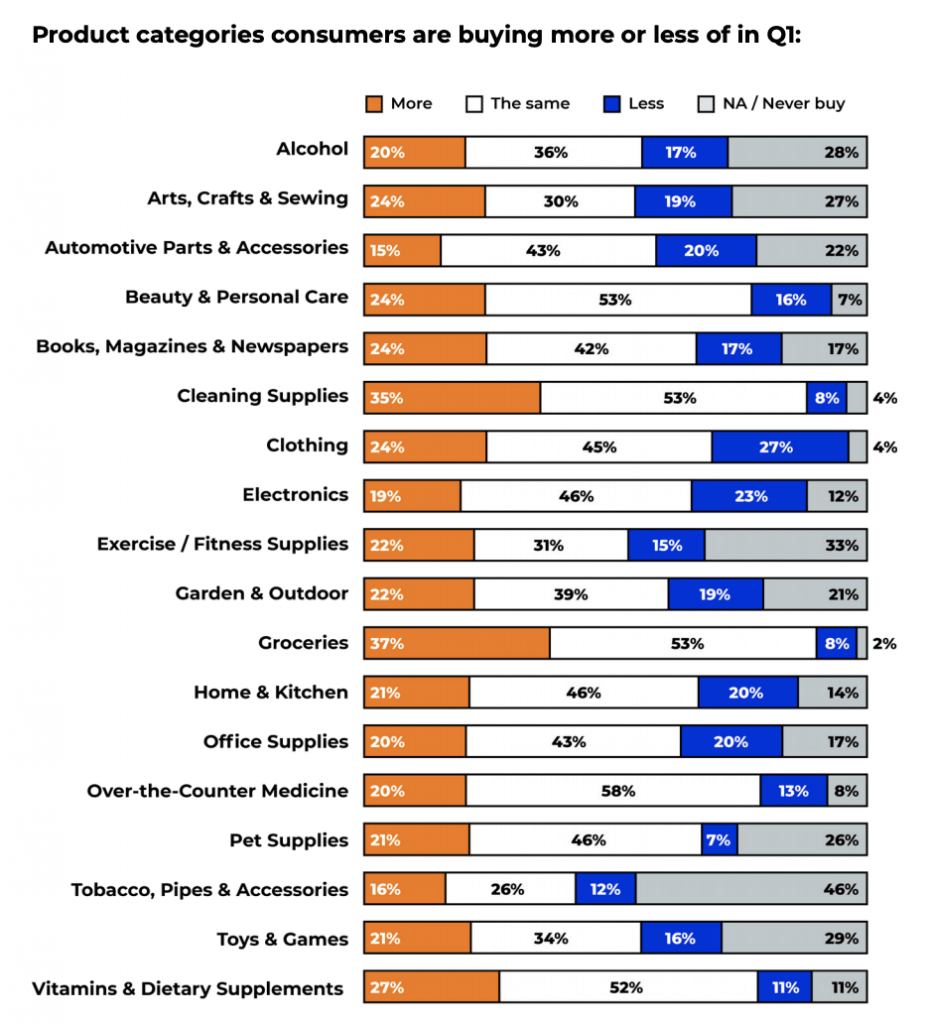 There were notable increases in some essential and health-related categories…

…as well as decreases in nonessential categories:

Remarkably, in every product category except grocery, the proportion of men buying more in Q1 was greater than that of women.

The categories in which men are out-spending women the most indicate mens’ greater willingness — or ability — to make discretionary purchases in the pandemic economy. For example, men are at least twice as likely as women to have purchased more electronics, toys and games, and tobacco this year versus Q4 2020.

Men and women prefer the same retailers, with some exceptions

In terms of where consumers shop in 2021, some of the top retailers are favored about equally by people of both genders. For example, roughly the same proportions of men and women shop online at Amazon and Target and in-store at Walmart and Costco.

However, more men are shopping at electronics outlets like Apple and Best Buy, while women shop in-store more than men at big-box retailers like Target and Kohl’s.

While a significant proportion of both groups are Amazon Prime members, men outnumber women. The same goes for Walmart+ memberships.

Men are more likely than women to shop at eBay, which aligns with the former’s greater demand for pre-owned goods.

When it comes to brand preferences, men are more likely to stick with specific labels.

Men’s preferences are also more pronounced in certain product categories. While both groups are strongly loyal to specific brands when shopping for groceries, clothing, and over-the-counter medicine, men’s brand loyalty stands out in these categories:

Women are about 9% more brand loyal than men when shopping online for beauty and personal care products.

Despite the fact that more women than men use social media — and that social media influencers are overwhelmingly women — men are more likely to use social channels like Instagram, YouTube, Facebook, and TikTok to search for products.

Differences in income and employment may inform spending discrepancies

In the U.S., men tend to have higher levels of workforce participation and earn more income than women, which provides context for differences in consumer spending between the two groups.

Whereas two-thirds (66%) of men say they are employed, either full- or part-time, just under half (49%) of women report working paid jobs in 2021. Roughly 7% of women identified as homemakers; no male respondents thus categorized themselves. 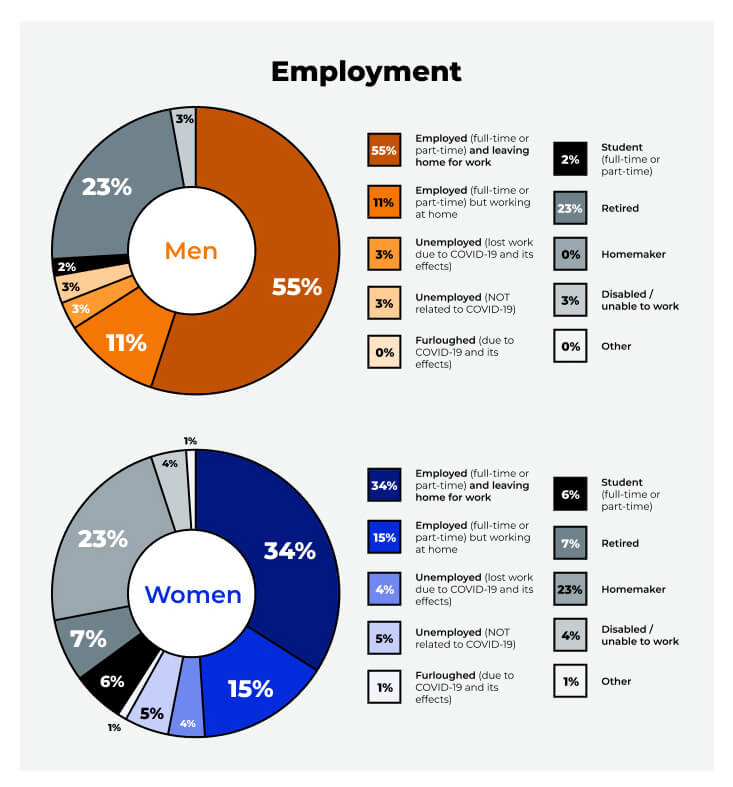 Additionally, 6% of men said they were unemployed, versus 10% of women who said the same. More women reported being jobless or furloughed due to COVID-19 and its effects (5% of women versus 3% of men).

American men are also more likely to earn what constitutes a living wage — the average annual income necessary to support an individual’s basic needs for food, housing, and clothing, and other resources — in the top five most populous states in the country. 26% more men than women earn over $33,072 per year, the annual salary threshold for individuals to meet minimum standards of living in California, Texas, Florida, New York, or Pennsylvania.

The gap widens when it comes to clearing the living wage for a family of four with two working parents, which averages to $46,159 annually. Our findings show that 68% of men earn $50,000 or more annually, versus just 51% of women — a difference of 33%.

As salaries climb into the six figures, men’s earnings outpace women’s at increasing rates. So while women out-earn men at yearly incomes between $50K to $99K, over two times as many men as women earn between $125K and $149K. At $150,000/year and above, male earners outnumber their female counterparts by 172%.

Men’s and women’s incomes have also fluctuated unevenly during the course of the pandemic. Since Q4 2020, men are far more likely than women to report increases in income, whereas women much more often report having lost income. 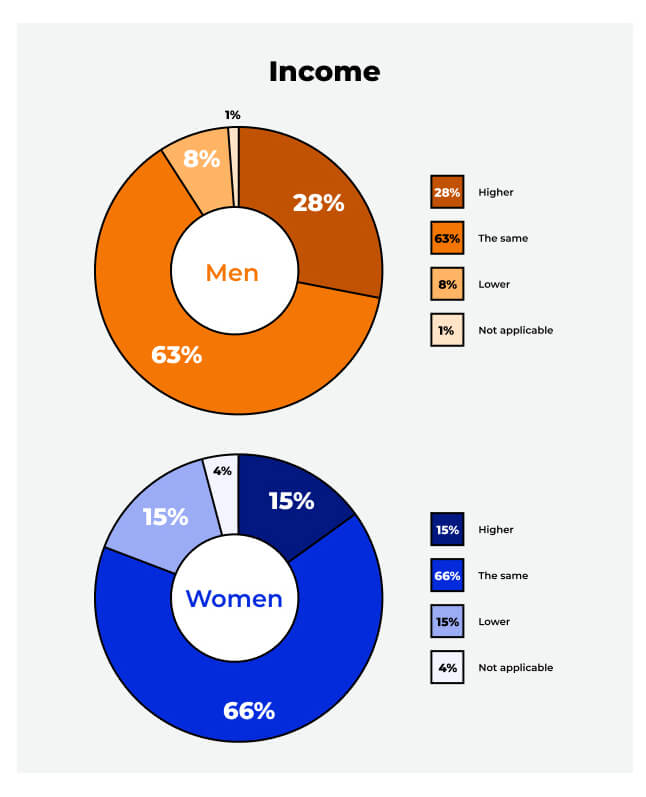 Men’s higher earnings, whether existing or recently increased, could explain why they’re spending more than women, particularly in nonessential categories like clothing, alcohol, and toys and games.

More men than women reported momentous lifestyle changes in the past year that ordinarily spur increased spending — like adopting a pet, having a baby, and buying a home.

In the past year:

This could shift as the year goes on and both men and women feel more comfortable traveling and attending in-person events — and shopping for what they’ll need to resume their pre-pandemic activities.

Differences in spending could also shift as consumers abandon the at-home daily activities they picked up during the pandemic in favor of stepping out to buy coffee, dine at restaurants, and work out at gyms. 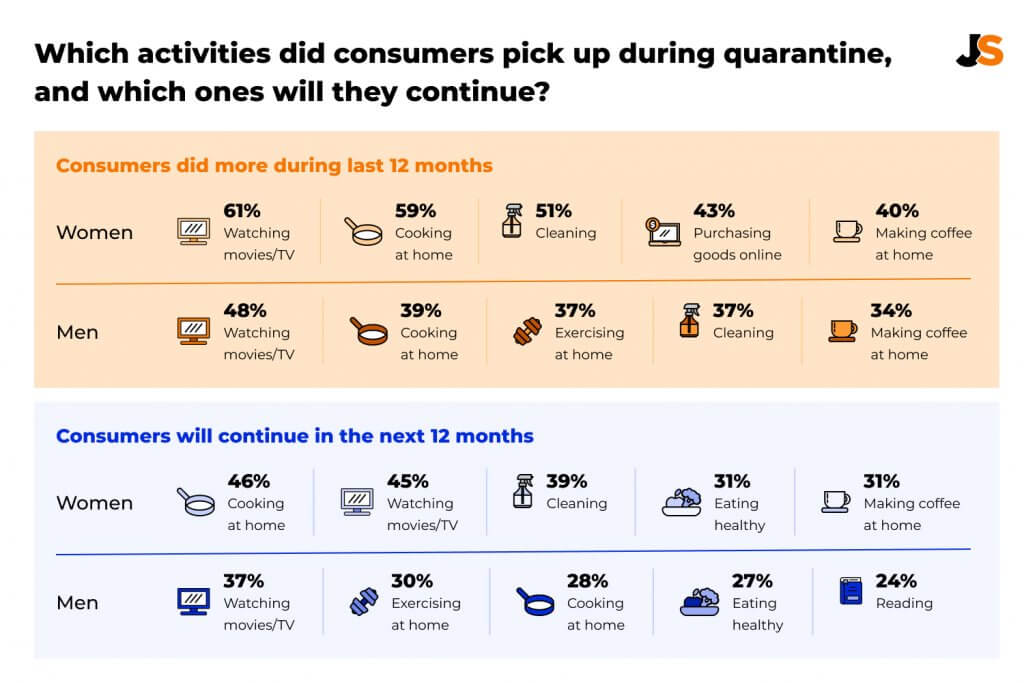 As a group, men tend to spend more money and shop online more frequently in 2021 than women do. This could be due to earning more income, undergoing momentous pandemic lifestyle changes, or a different reason.

While this trend may level out in the coming months as both men and women resume their pre-pandemic activities, it is interesting to see men defy conventional wisdom that states women are the more avid shoppers.

To learn more about how consumer behavior is changing in 2021, check out our latest Consumer Trends Report.

Which facts did you find most interesting from this report? Let us know in the comments!