Does it seem like most products you buy are made in China? According to the 2020 Global Imports Report, most probably are.

China is the leading maritime importer for the United States by an impressive margin. China not only sends far more products to the U.S. than any other country, it is the leading supplier across every import category, from textiles to plastics to metals and beyond.

Let’s dive into the data on U.S. imports from China to see what has changed over the years, identify the kinds of products China ships to the U.S., and project how China’s trade numbers will evolve in the future.

Historically, China has led all other countries in share of U.S. imports and has grown nearly every year the amount of products it sends to the U.S.

In the past five years, China’s share has steadily risen above 40% of all U.S. imports, despite increased tariffs and surging growth among other U.S. importers.

What kinds of products are imported from China?

China is the leading supplier for every import category for the United States. Its top three import product categories are the same for the U.S. overall: Machinery & Electrical, followed by Miscellaneous, then Textiles.

From January to June 2020, these three categories made up a combined 50% of China’s exports to the U.S. and roughly 41% of overall U.S. imports.

Machinery & Electrical, Miscellaneous, and Textiles include a vast range of products, not all of which are consumer-friendly. But many recognizable brands source imported household essentials within these categories—like blenders, candles, and gym socks—from Chinese manufacturers. Using Jungle Scout’s Supplier Database, we can see which of these top retailers source products in China to sell on Amazon.

With that, let’s highlight a few of the big brands that currently sell products on Amazon sourced from Chinese suppliers, by top U.S. import categories.

The Machinery & Electrical category encompasses many common household devices. Think laser printers, countertop juicers, and those feline-friendly go-karts otherwise known as Roomba vacuum cleaners. In the first half of 2020, machines and electrical products made up roughly 20% of all U.S. imports and 24% of Chinese exports to the U.S.

Kitchenaid is a well-loved American brand within this category. Perhaps most famous for its lacquered stand-up mixers (and their various fancy attachments for apple-peeling and zoodling), it sells many other small appliances, kitchen gadgets, and cooking tools.

It’s owned by the Whirlpool Corporation, which sources products from a few different suppliers located in the Chinese cities of Suzhou, Qingdao, and Foshan.

One of Kitchenaid’s closest competitors is Cuisinart. 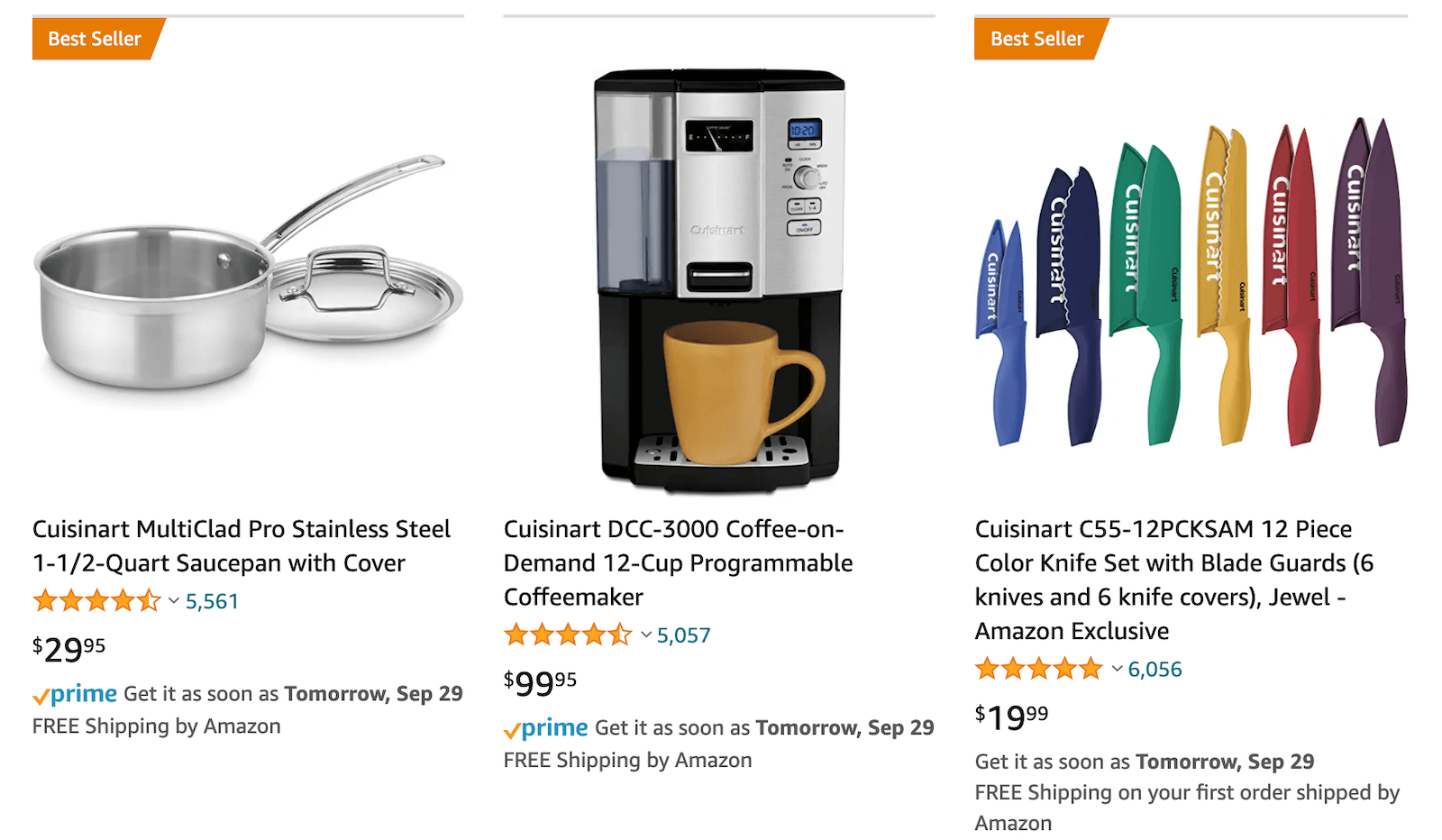 Owned by the Conair Corporation, it sources products from a supplier located in Shenzhen.

A classic Timex wristwatch represents a mosaic of global production.

In addition to suppliers in the Philippines and the Netherlands, Timex Group sources parts from Yfy Jupiter Limited in Shenzhen.

Toys and games are other popular Amazon items categorized as Miscellaneous imports. Products sold by toy giant Mattel, including Barbie dolls and Baby Yoda figurines, are sourced from the Chinese cities of Dongguan and Guanyao. 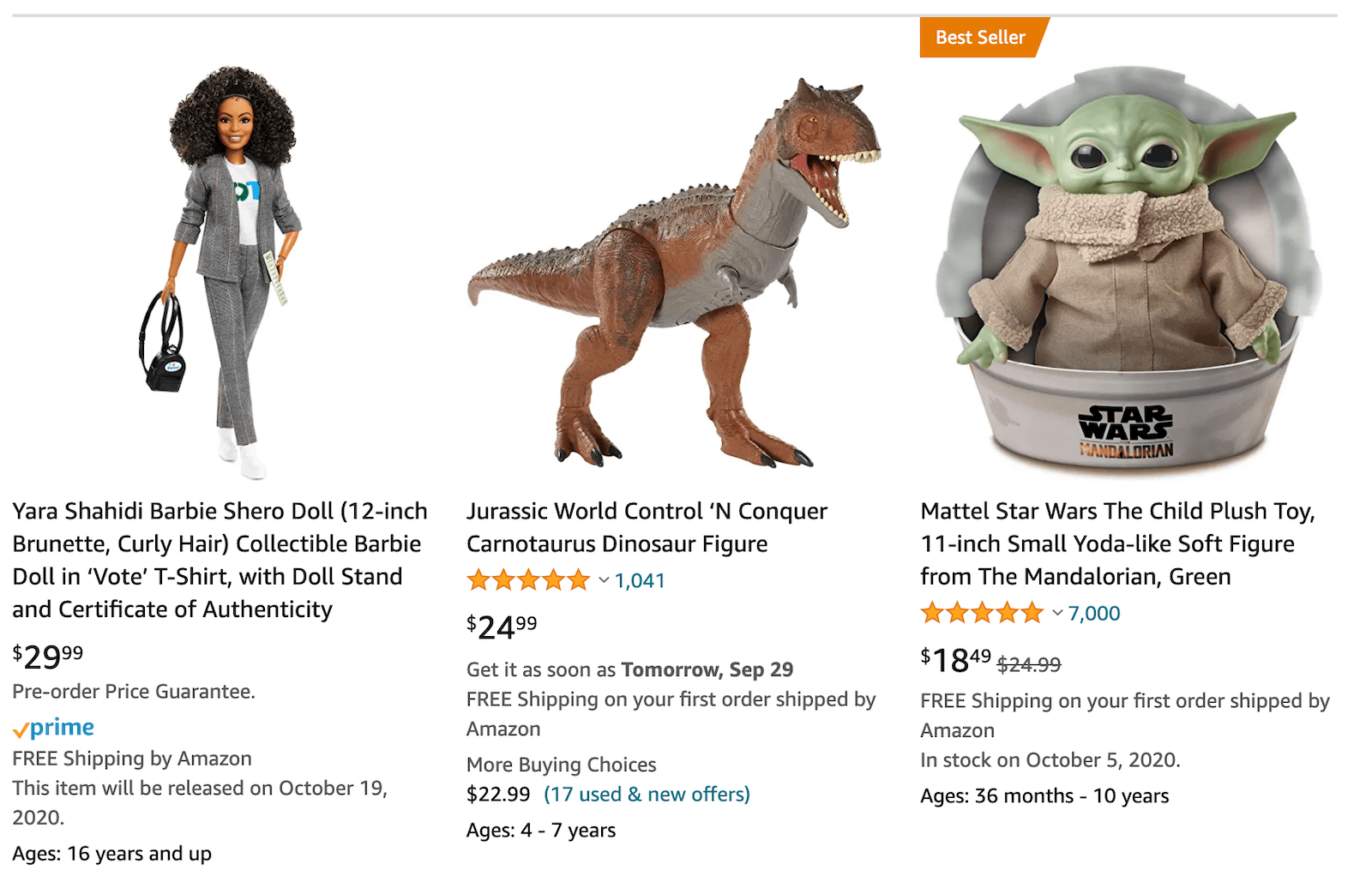 Amazon staples like bedsheets, rugs, and clothing all fall under the Textiles import category. Roughly 11% of 2020 imports to the U.S. from China have been categorized as textiles. This is about the same as overall U.S. textile imports for this year, which in June topped out at roughly 11.3% 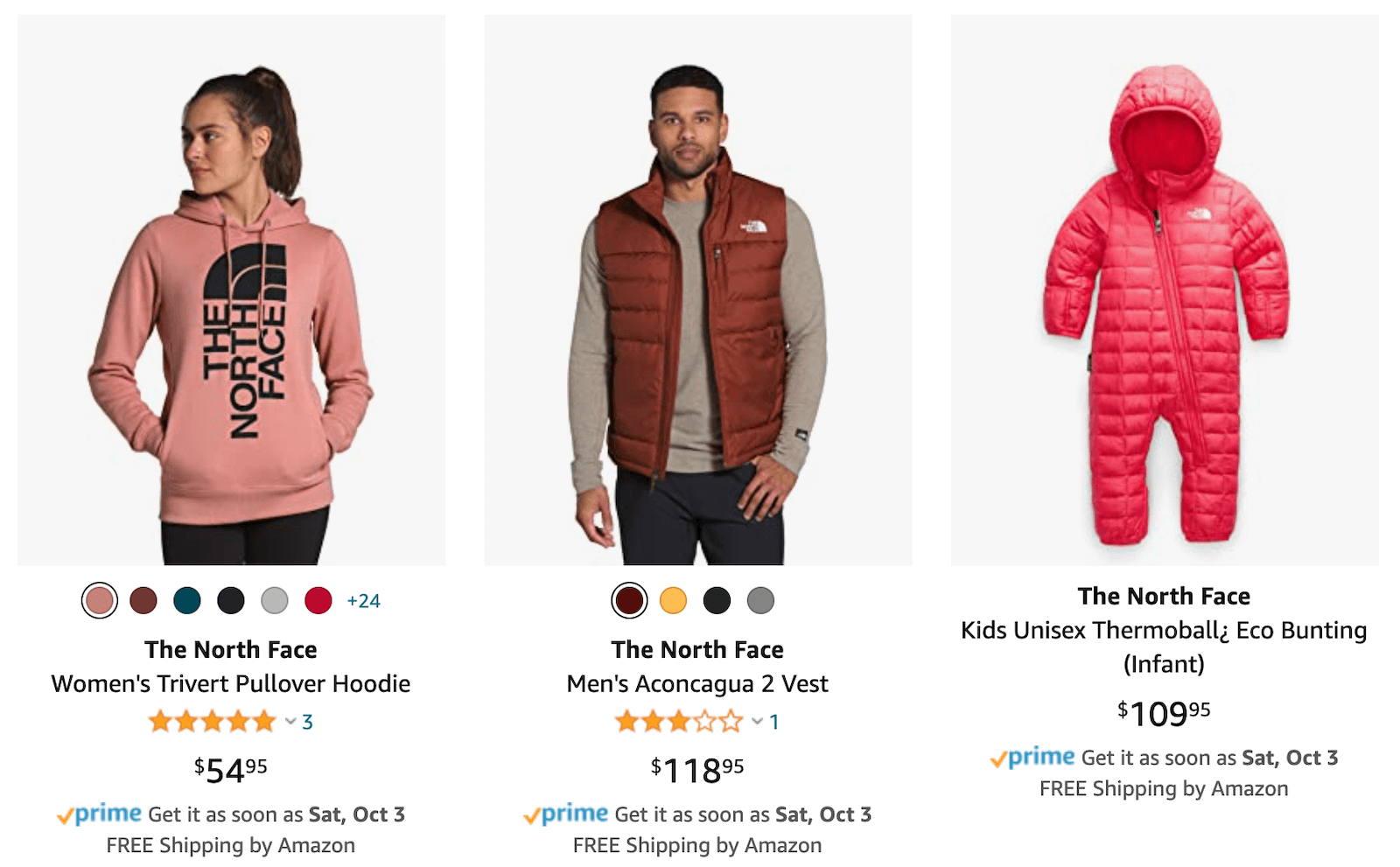 Hanes t-shirts are another example of textile imports from China. 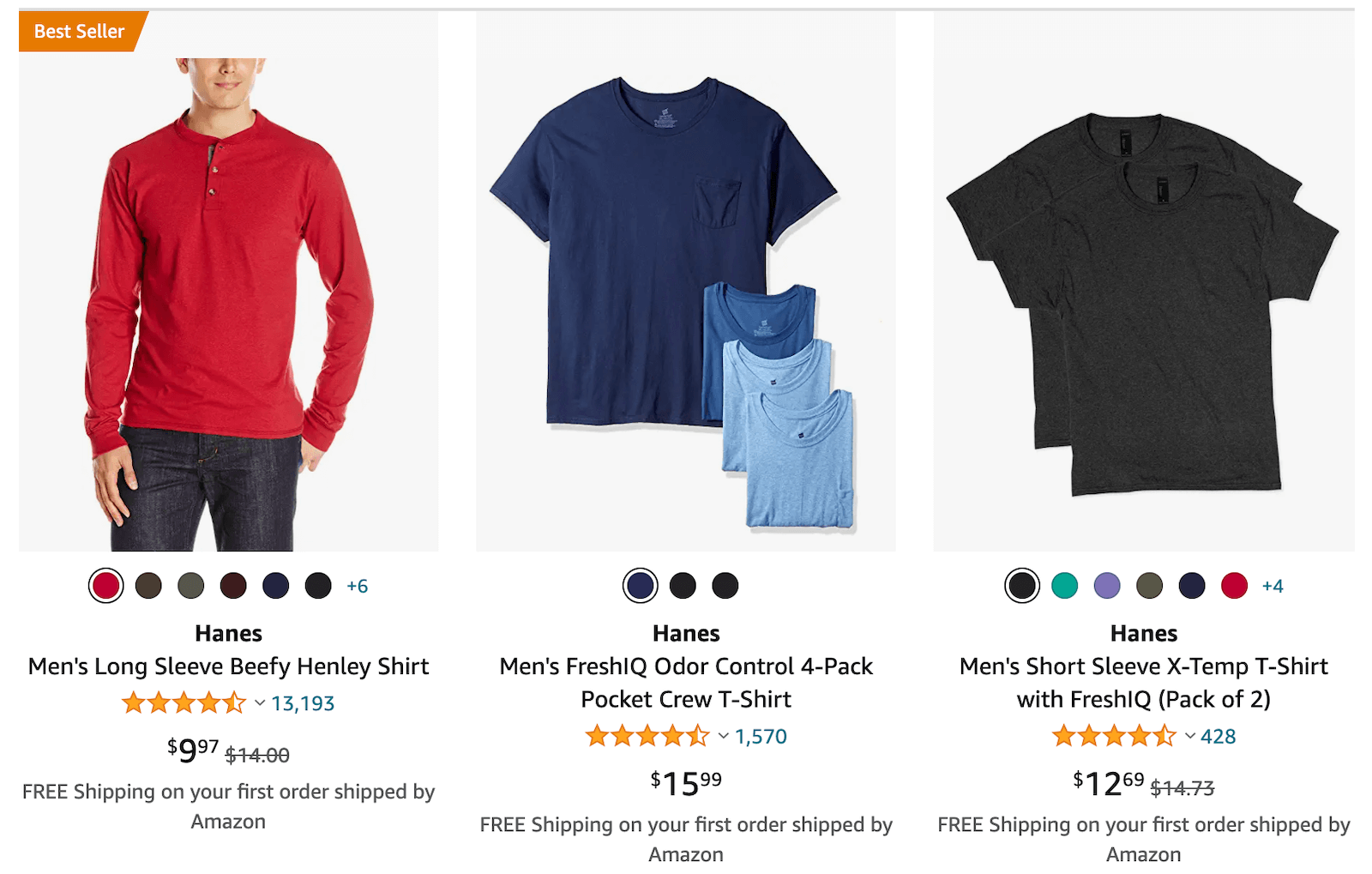 These tees are made by suppliers based in Nanjing, Shanghai, and Ningbo.

Keep in mind that the U.S. also imports more of each category from China than any other country. You’ll find yet more top brands selling Chinese-made products like toilet paper, bicycles, and shoes.

While the first half of 2020 proved challenging for all U.S. importers, China bounced back early to regain positive year-over-year growth in monthly exports to the U.S. 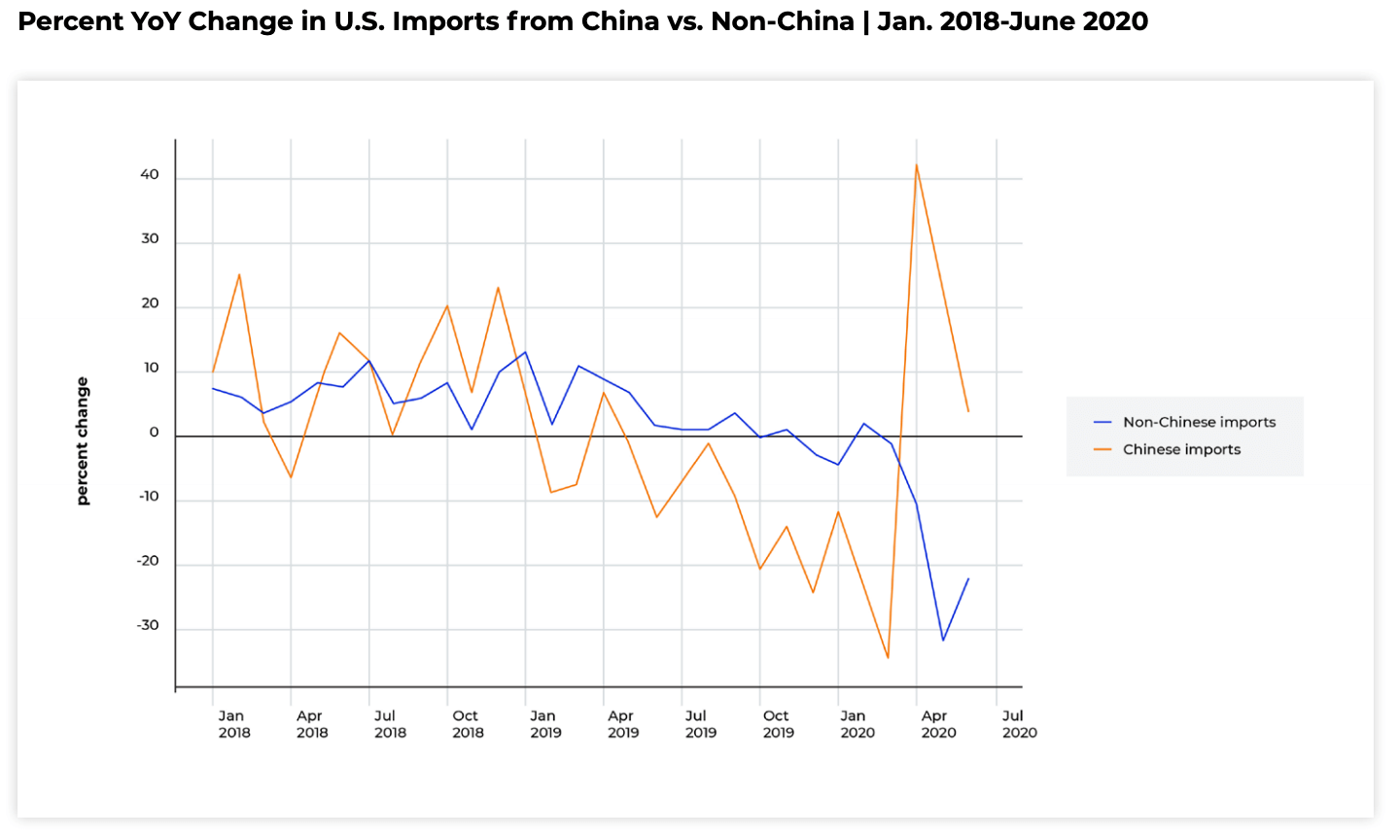 Import records for July through December may look different than those from January to June; U.S. imports are typically 6% higher in the second half of the year. At that rate, the U.S. is projected to receive 11.7 million maritime imports by year’s end. If China stays on track with a 41% share of that total, it will have sent 4,787,000 exports to the U.S. by December 31, 2020.

What would happen if the U.S. stopped trading with China entirely? It’s possible that several countries in Southeast Asia could step in to cover the difference, though it’d be an enormous feat to compensate for a sudden loss of 41% of all U.S. imports.

Take for example what happened earlier this year, when China’s manufacturing dropped dramatically as its COVID-19 cases and deaths spiked. In February and March 2020, China suffered the second-worst year-over-year loss in share of U.S. imports, shrinking 35.3% in March (Hong Kong came in first).

Vietnam, Malaysia, and Singapore each increased their exports to the U.S. at significantly higher rates than they had in the same months in years past.

Despite their record growth, they weren’t quite able to make up for the loss of Chinese exports.

We can also look to countries with sizable U.S.-bound exports within the top U.S. import categories. For instance, Germany, South Korea, Taiwan, Japan, and Vietnam contribute heavily to U.S. Machinery & Electrical imports. As far as Miscellaneous imports go, the U.S. could look to other leading traders like Vietnam, Taiwan, and Italy. For Textiles, the U.S. could ask Vietnam, Bangladesh, and India to help close the gap. As the chart below shows, there would be quite a lot of ground to cover, and would likely require a joint effort by other top traders within each category.

Regardless of what happens with global trade, China already has millions of exports to the U.S. on the books for 2020.

It’s reasonable to guess that China will continue to lead U.S. imports in every category for the foreseeable future. So no matter what product you purchase, there’s a good chance it’ll have come from China.

For more on China’s trade with the U.S., check out our 2020 Global Imports Report.